I’m sure any dedicated film fan would agree – it’s almost impossible these days to watch any film without feeling like it reminds you of another: a sort of cinematic déjà vu. As soon as I saw the poster for La piel que habito, or The Skin I Live In, directed by the stylistically decadent and thematically adventurous Pedro Almodóvar, I was struck by how much the image of dark eyes peering out of a white mask reminded me of something. But what? It took me a while to figure it out, but once I realised which film it echoed, I couldn’t shake the thematic, narrative and visual links between the two. That film was Georges Franju’s Les yeux sans visage, or Eyes Without A Face, an Expressionistic and austere French horror-noir from 1960.

Almodóvar is too much of a stylistic innovator to let any one film overshadow his own work – in many ways The Skin I Live In subverts traditional narrative expectations and successfully forges its own cinematic legacy. But still, the echoes of Eyes Without A Face are there – from the stark image of a young woman in a white mask, whose identity and motives are as opaque as the mask she wears, to the extravagant mansion in which she is prisoner, and especially – to the madman of medicine holding her captive. Essentially, both films tell the same story: a successful and inventive (in the Frankenstein sense of the word) doctor, driven by past loss and heartache, strives to revive a loved one’s beauty by using a young woman as his human guinea pig. But as the young women slowly realises her potential to move from inert object to active subject, she takes matters into her own hands in a bid for freedom.

The ways in which these two films mirror each other are just as interesting as the ways in which they don’t. Several critics have noted that Almodóvar’s film can be regarded as a “queering” of Eyes Without A Face, and indeed, there is a pivotal moment when The Skin I Live In really becomes its own beast, taking a turn for the queer – though, in the more bizarre sense of the word. If you haven’t seen the film, you’d better stop reading now. Part of the film’s fun is its narrative freewheeling through several twists and turns, and I won’t ruin that for you without fair warning.

SPOILERS AHEAD – In The Skin I Live In, the woman being held captive is the beautiful, lithe Vera (Elena Anaya). She lives in a sparsely-furnished room in which she is monitored by cameras while she practices yoga and counts the days on the walls. Her captor is the damaged and compulsively voyeuristic Dr. Robert Ledgard, played by the charismatic Antonio Banderas. The true extent of Dr. Ledgard’s ethical transgressions does not become clear until well past the halfway mark of the film – and much of the film’s power lies in the reveal. His prisoner, Vera, has only recently become a woman. She, or he, was once a young man named Vicente (Jan Cornet), who at a party, tried to have sex with Dr. Ledgard’s daughter, Norma (Blanca Suárez). Although Vicente doesn’t get very far with Norma sexually, her subsequent suicide drives Dr. Ledgard to track down and imprison the man responsible for his daughter’s mental breakdown. Ledgard’s punishment? To make that man a woman. To change his subjectivity; to alter his status in the power structure of society, and even more creepily – to fashion him in the image of his dead wife.

Firstly, it remains a feat of filmmaking that this much plot can be communicated without completely alienating an audience. The various reveals of the film unfold gradually, and as one would expect from Almodóvar, with oodles of style. As you can imagine, this kind of plot twist opens a whole new can of worms, and seems deliberately designed to ignite speculation in men about existence as a woman. It’s here where I think the truly subversive and interesting aspects of the film come to the fore: how is Almodóvar using his narrative to make us think about gender?

And not just gender! Both films are interested in the male gaze, and the price of physical perfection. If you look closely at the mise-en-scène of both films, the mansions in both are decorated with images of voluptuous women in recumbent “come hither” poses, with paintings and extravagant arrangements of flowers and exquisite decor – suggesting the importance of beauty to the man of the house. The voyeuristic and image-obsessed nature of Dr. Ledgard is very explicitly essayed in The Skin I Live In. He spends the first third of the film watching Vera in her room, and the camera caresses her body from his point of view several times. Vera tells Ledgard she can feel him watching – and she invites him closer as part of her plan to obtain freedom. She’s watched herself being watched, and sees that she can use it to her advantage.

Gender seems to be a theme that Eyes Without A Face is also interested in, though in a far more subtextual fashion. The woman being held captive in Eyes Without A Face is Christiane (Edith Scob), who happens to be the daughter of her captor, Doctor Génessier (Pierre Brasseur). Her face is burned beyond recognition (apart from her eyes), hence the mask. Dr. Génessier is searching for a face to heterograft onto Christiane’s scarred visage, and is willing to forego some ethical boundaries to make that happen – even if it means going through every pretty girl in Paris to find the perfect face. Already there is a large point of difference between the two films: the perverse Stockholm syndrome sexual tension between captor and captive does not exist in Eyes Without A Face, although her father’s obsessive dedication to his daughter’s former beauty suggests something deeply repressed.

In Eyes Without A Face, Dr. Génessier never seems happier than when he (mistakenly) believes that he has successfully transplanted a new face onto Christiane, and he even comments to a female patient that it “would be a shame” if she lost her hair, letting his comment linger with a twinkle in his eye. He also later examines a potential victim, staring into her face with a longing intensity which feels both sexual and clinical. In Eyes Without A Face, the sexual undertone to Dr. Génessier is very subtle – almost nonexistent – a stark contrast to the sexually-charged voyeurism of Dr. Ledgard in The Skin I Live In. 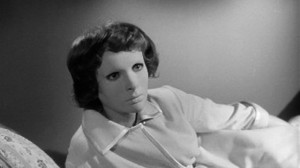 Both films revolve around a major surgical procedure. In Eyes Without A Face, the procedure is its horrifying centerpiece: a five-minute real time spectacle in which the doctor painstakingly removes a young girl’s face – it’s a bravura sequence, and the film’s most truly gripping moment. In The Skin I Live In, the horror is far more subliminal – it comes from the act itself and not from witnessing it; from performing a vaginoplasty on an unwilling participant as revenge. The horror comes from having one’s identity changed in such a permanent way – a change that will potentially have more social repercussions than physical. It’s here the title of the film becomes poetic. In a scene where Dr. Ledgard introduces Vicente to the phallic dilators he will need to insert into his vagina to ensure the wound heals properly, the look of horror on Vicente’s face as he realises how drastically the tables have turned on him is the same horror I believe many men would feel watching the scene. It’s the horror of losing power and being trapped in your own body, the fear of humiliation and the sexual vulnerability of becoming the invaded rather than the invader.

The clues which suggest these films might be more interested in gender than perhaps they appear (given that they are both considered horror-noir genre pieces; style over substance) can be found in their narrative structure. Both films open enigmatically, with no clear protagonist, and save the reveal of their central women for as long as possible. However, both films slowly give themselves over to the subjugated women at their core, and end with their liberation from the men who were willing to violate other women, the law and genetics to control and perfect their image. If this seems like too feminist a reading, go back and review the films for yourself. The Skin I Live In shows us a man who has become a woman deliberately playing the traditional, feminine role in order to play a trick on a man – unmasking it as a performance and not an innate way of being. 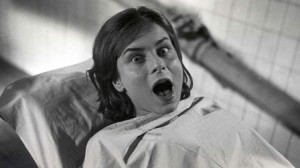 In Eyes Without A Face, Christiane lives in anguish while she waits to become beautiful and ready for social re-integration. To escape her daily misery, she has to defy her father, who ironically, ends up facially disfigured. She leaves the house with a symbol of purity and beauty, a dove, upon her hand. If anything, these films paint patriarchy as the villain. Of course, there are many other themes at play in both these films, and many other points of comparison, but for two films sometimes written off as genre oddities, there is definitely more at play beneath the surface.

Ultimately, the films function for me as companion pieces, thematically and stylistically. One can only speculate on how much Eyes Without A Face directly influenced Almodóvar, and how many of the similarities are coincidental, but its presence is still keenly felt in The Skin I Live In’s iconography and narrative. I consider both films an excellent contribution to the horror-noir genre, as well as great films in their own right, and the perfect double feature if you’re looking for something as grotesquely compelling as it is thought-provoking.