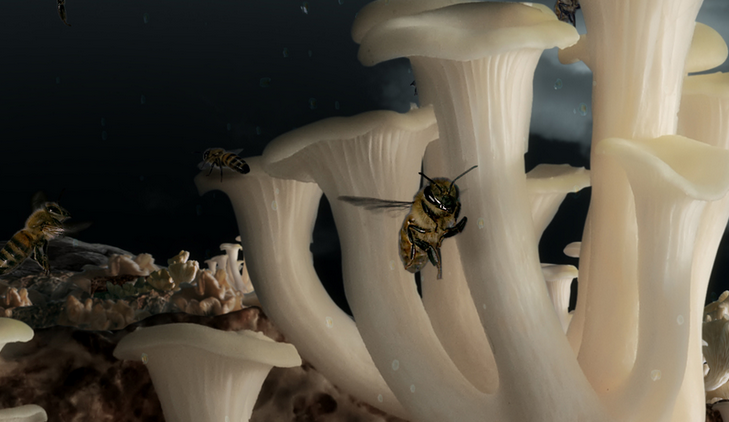 The Sensory Environments program, part of the Environmental Film Festival Australia, is a collection of five experimental short films aimed at providing an ‘immersive sensory journey through the natural world’. Screened at Melbourne’s Loop Bar, the sold out session had audience members crowded into the cozy viewing room, adding to the sensory experience. The short films were unified by their non-linear format, abstracting extreme close-ups and rich soundscapes, mixing natural sounds with minimal music. The sounds and the visuals washed over you creating more of an experience then a film screening.

The program started with Demelza Kooij and Lars Koens’ 2014 short, Graminoids. Filmed in the sweeping Scottish fields of Arthur’s Seat, the slow shots of long grass dancing in the breeze teamed with heightened sounds of the wind and grass created a beautifully hypnotic experience.

Next was Noah Shulman’s 2014 Confluence. Macro and micro lenses were used to capture the abstracted beauty of the world beyond the limits of our natural vision. Shulman’s use of shallow depth of field allows you to focus on the fascinating patterns that are otherwise unseen providing a unique perspective of the world.

Third was Paewl Wojtasik, Toby Lee and Ernst Karel’s 2014 Single Stream. Opening with what looks like confetti falling from the sky, it is soon revealed that it’s rubbish blowing out of processing machinery. Rubbish waterfalls cascading down larger rubbish mounds dominate the frame while repetitive sounds of machinery blend with that of the waste to create a soundscape of monotony. Moving through the sorting and compacting process we are reminded of our lives of excess. The film ends as it began, with the rubbish falling like confetti. After seeing so many items that were used once and tossed away it’s difficult not to think that confetti and rubbish are once and the same.

Fourth was Momoko Seto’s 2014 Planet E, an experimental short of magnified insects emerging from frozen tombs to crawl once more while fungi and moss spring to life in a somewhat grotesque fashion. This curious landscape of large-scale tiny creatures creates an otherworldly atmosphere. The short has clear links to climate change, ending with once flying bees raining dead from the sky.

The screening ended with Edie Stevens 2014 Eves-Land’s Line. Filmed from the back of a train, the film is a hypnotic view of train tracks expanding off into the distance. The soothing style soundtrack heightens the hypnotic sense creating a meditative visual and aural experience.