It’s no secret amongst my friends that I’m a huge Hayao Miyazaki enthusiast. If I could choose only one director’s films to watch for the rest of my life, and no other, it would probably be his. When the people at Pixar look to his films for inspiration, you have a feeling the guy makes some pretty okay movies. Miyazaki films always leave the viewer with a feeling of warmth and a sense of contentment. Kiki’s Delivery Service is no doubt a film for all the family, to please animation fans everywhere, or simply for those just in the mood for a story with a lot of heart.

When a witch turns thirteen years old, she must leave home as a custom on a full moon night to begin her training as a witch. Kiki is thirteen, and with her black cat Jiji, is raring to leave on her journey and has big dreams – she’s going to find a city near the ocean, and become the best witch she can be. She finds the perfect town by the sea, but things aren’t as wonderful as she could have hoped. Her skill being flying, she sets up a delivery service in town, but has trouble fitting in with the people her age, many people don’t seem fond of witches, and getting her business off the ground is trickier than she thought. With the support of a kind baker, a young artist called Ursula, and aircraft fanatic Tombo, Kiki pushes on against the adversity she faces, including the loss of her witches powers! 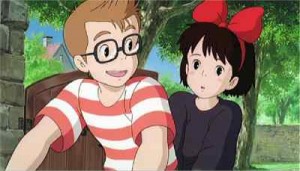 One of the things I like very much about this film is that there is no real ‘villain’ per se…even in a Disney/Pixar film like Toy Story a villain takes form in the form of a naughty child. But, in Kiki’s Delivery Service there is no cruel or wicked person out to stop Kiki or take over the world. The things Kiki has to overcome are for the most part things that any young girl would face. She deals with things that could happen to anyone – feeling out of place, lonely, or just a sense of uncertainty and a lack of confidence. It’s very relatable and it’s part of what makes this story so endearing.

For the most part, Kiki is a cheerful, laughing, if slightly stubborn character, so when she faces this crisis of confidence and begins to lose her ability to fly and to communicate with Jiji, the resulting character change she goes through feels very human and very real. Again, it’s not a magic spell she needs or a mystical potion – Kiki needs the kindness and love from her friends in order to lift her spirits and regain her confidence. That is what is at the heart of this film, and it’s a beautiful and simple sentiment. 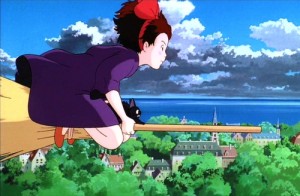 Miyazaki’s fascination with flight and all kinds of flying machines is very present (perhaps only more so in Porco Rosso) and the flying scenes in Kiki’s – that beautiful sense of movement – are superbly animated. A lot of it is very understated, such as in the brilliant and exciting finale, but every time Kiki takes off on her broom, there is the same, familiar rush of exhilaration. There isn’t even much use of a sweeping, momentous musical accompaniment (although when it is there, the score from Joe Hisaishi is lovely as ever), but it isn’t needed. The simplicity of it all makes it magical experience (I did indeed use the phrase ‘magical’ to describe a movie about a witch. You’re welcome.)

A wonderful cast of characters, including the jolliest baker you’ve ever seen and a very sarcastic black cat, round out a delightful film. Heartwarming, sweet, and all Miyazaki films, remarkably uplifting.

Kiki’s Delivery Service is recently available on Blu-ray thanks to Madman Entertainment with a super duper range of extras. For more reviews, click here. If you’re digging ReelGood, sign up to our mailing list for exclusive content, early reviews and chances to win big!