"There’s a serious purpose to his film and serious consequences for these men. But the premise does indeed sound like a blast."

"The ways things start to go south may not be surprising, per se, but they sober us up in a way we probably need at that point."

Men go through mid-life crises in all sorts of ways. Some buy sports cars. Some trade in their partner for a younger model. Some go on a fitness kick. The men in Thomas Vinterberg’s Another Round start drinking morning, noon and night – well, morning and noon anyway. It’s not that their middle agedness requires these Danish fortysomethings to drown their sorrows, though sorrow is the inciting emotion behind the endeavour. It’s that they see alcoholic consumption as the means of recapturing a vitality and mental acuity they haven’t had since they were teenagers, since they’d run laps in one of those crazy competitions where you chug a pitcher of beer every kilometre. 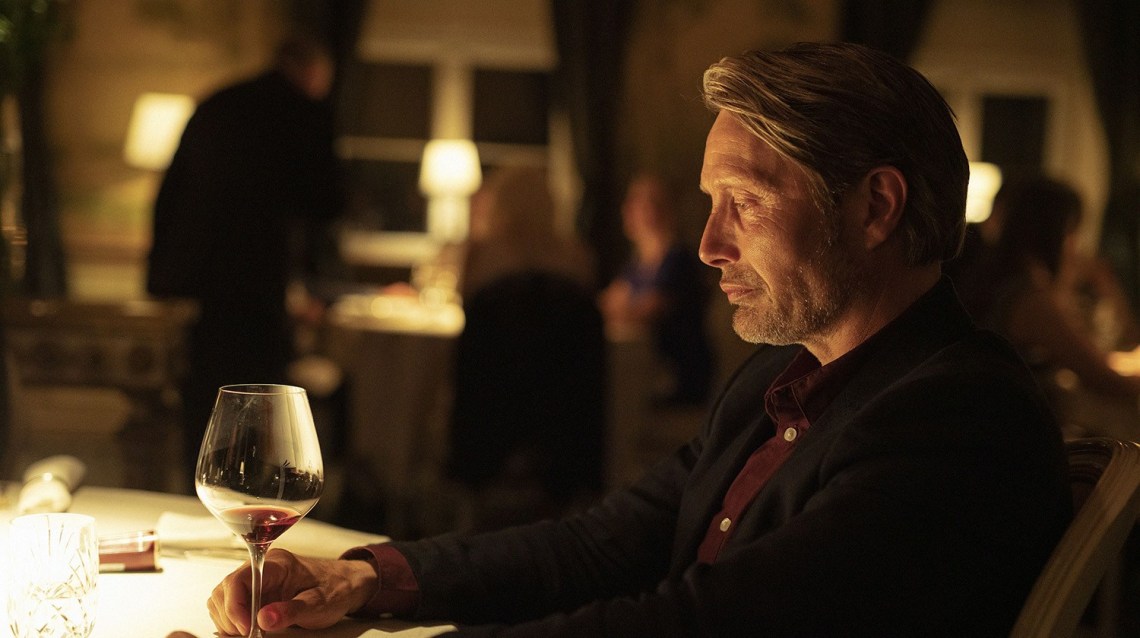 Another Round sounds like the premise for an Adam Sandler or Will Ferrell movie, and we shouldn’t be surprised to see one of those stars appearing in an eventual American remake. (Ferrell having recently starred in Downhill, an American remake of a film made by Vinterberg’s Swedish neighbour, Ruben Ostlund.) But Vinterberg is not the type of director who makes movies for a larf. There’s a serious purpose to his film and serious consequences for these men. But the premise does indeed sound like a blast.

Four teachers at a Copenhagen high school have lost their lust for teaching, and really, for life in general. The youngest, Nikolaj (Magnu Millang), is turning 40, and the guys have enough residual good spirt to take him out for a fancy dinner. One glass of wine/tumbler of scotch leads to another, and they get to discussing both their dissatisfactions in life — which they’ve either taken home from work with them, or vice versa – as well as a possible cure.

Turns out the Norwegian psychiatrist Finn Skårderud had a theory that humans were born with a deficiency of alcohol in their blood that could only be corrected by elevating to a blood alcohol content of 0.05. In addition to the obvious loosening of inhibitions that has long been part of alcohol’s marketing materials, this equivalent of being a glass of wine drunk at all times would also make a person more creative. Or so his theory went.

The four decide to test the theory, agreeing to follow strict guidelines to document it for scientific purposes, to be sure their intentions remain pure. They’ll only drink during the day, and follow Ernest Hemingway’s rule of quitting when the sun goes down. And they won’t get any tipsier than what Skårderud recommends, for fear of a loss of their employment or their otherwise supportive spouses. Nikolaj, Tommy (Thomas Bo Larsen) and Peter (Lars Ranthe) are game, but needing it the most may be Martin (Mads Mikkelsen), who is overcome with melancholy at dinner over the gradual slipping away of everything he cares about, including his distracted wife (Maria Bonnevie). They finish off that night jovially shouting and boxing in the streets, but begin their more stringent methodology a few days later. 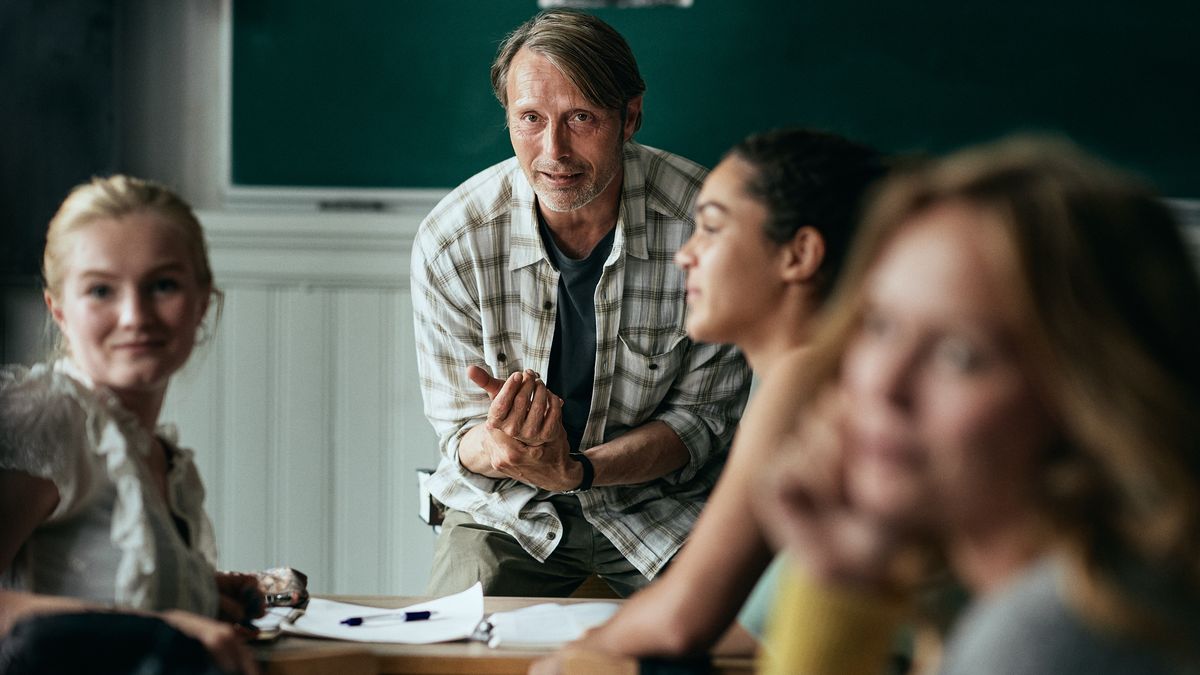 Watching the first half of Another Round is akin to watching all the pieces of a perfectly conceived thought experiment slot into place, with a script that knows how to get the most of it. Predictably, this is also the portion of the film that’s the most fun. Letting off steam seems healthy, even productive, as the men start making connections with their students that were frayed at best before then. Did we say Martin needs this? In a previous lecture he’d confused World War I and World War II. Now, he’s drawing vivid parallels between world leaders that find deeper meanings in their unexpected similarities, like a guy who just made his first YouTube video essay. He’s also bounding around the classroom, to the delight of his students.

The actors are invigorated as well, though Mikkelsen, the one most familiar to us, has never needed to rediscover his muse. He’s re-teaming with Vinterberg after 2012’s The Hunt, and the strong working relationship between them is evident in the way he commits himself to subtleties of the role. A memorable scene near the end that’s not fit to spoil also came into being because of Mikkelsen’s trust in his director. Larsen is a second returning collaborator from The Hunt, not to mention about a half dozen other Vinterberg projects. As the senior member of the group, he lends a gravitas as well as being the most convincing drunk. 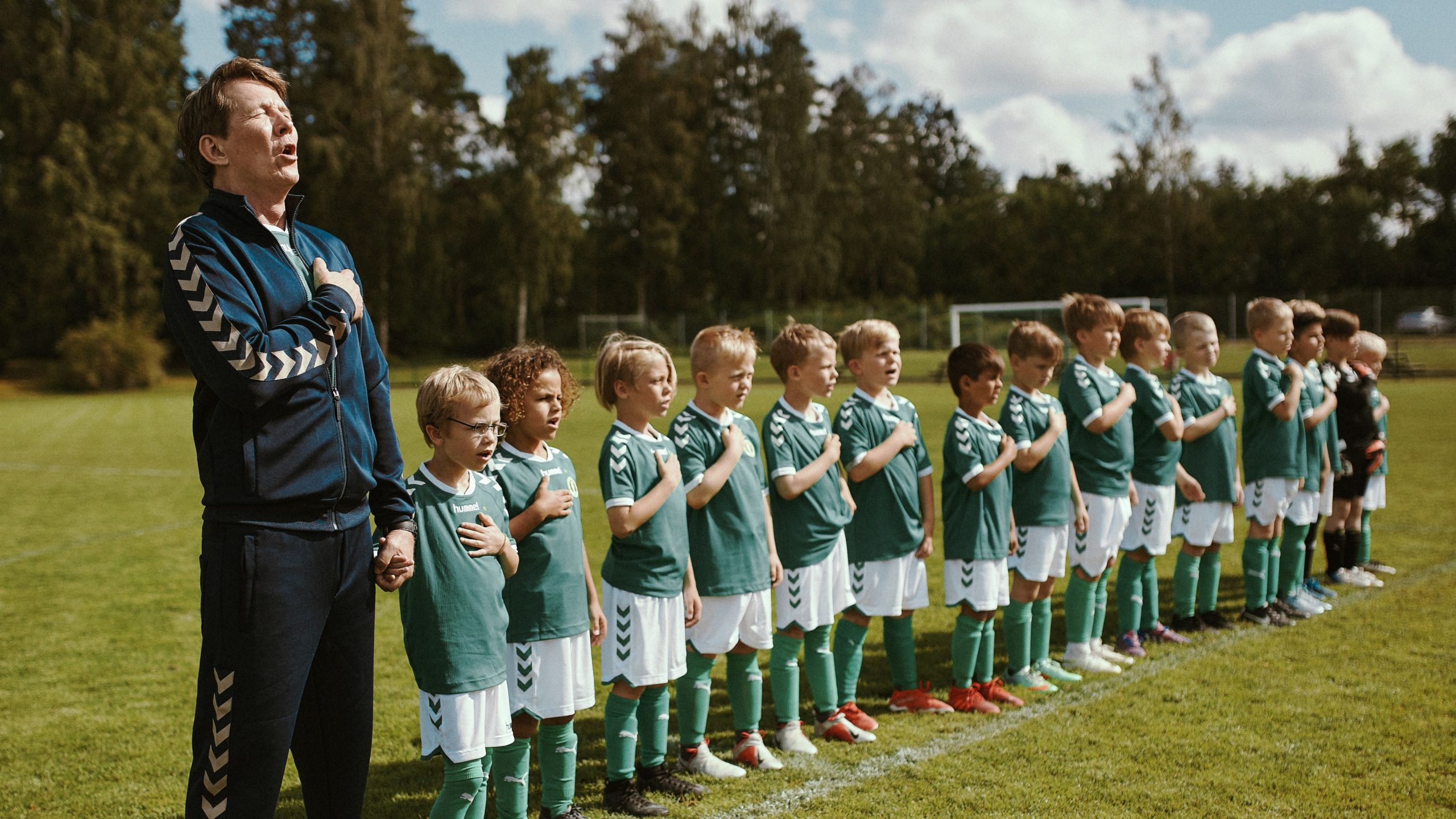 An experiment like this cannot go off without a hitch. It would probably be irresponsible of the film, especially to a world of recovering alcoholics, to suggest that it might. The ways things start to go south may not be surprising, per se, but they sober us up in a way we probably need at that point. And they allow the actors to continue displaying the full breadth of their emotional journeys.

Vinterberg remains at the top of his game, continuing to provide us thoughtful social dramas that underscore the frailties of his characters. As his one-time creative partner Lars von Trier has become increasingly grotesque and obtuse, Vinterberg has further solidified the ground on which he walks and makes movies. Despite some detours into areas we might not have seen coming — like the Thomas Hardy adaptation Far From the Madding Crowd, and Kursk, the real-life Russian submarine tragedy – Vinterberg keeps returning to his core self, which he debuted in The Celebration and revisited most potently in The Hunt. While von Trier is a consummate masochist, he’s a consummate humanist. 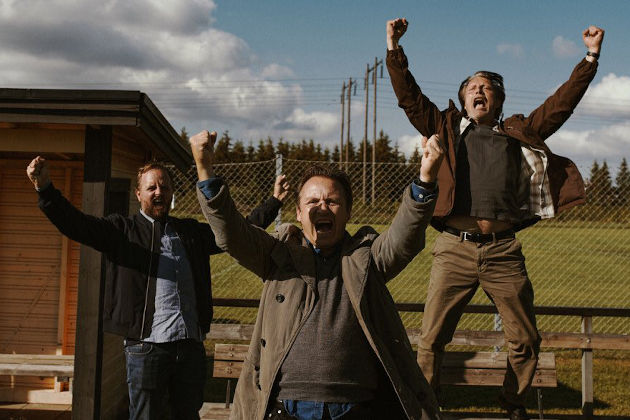 What cries out from Another Round, with alcohol as only the messenger, is a need we all feel to stave off total stagnation. As we burn off calories more inefficiently, lose hair, take for granted jobs and families that once brought great fulfilment, and basically cease to exist beyond going through the motions, we inch closer to death. Sometimes it takes radical ideas to save ourselves, and sometimes they don’t work in the exact ways we’d hoped – but it’s the instinct to save ourselves that’s important.

Another Round is opening in cinemas on February 11.