" In 2021, we could all use a little dose of Akeem’s childlike optimism and charm."

"The makeup effects are so good, at certain points you might think these were outtakes from 1988 rather than new material."

The long-delayed sequel has a chequered history, but a good recent one. Just last year we saw two such movies hit the (small) screen at least a decade after the most recent movie in the series, and in one case, nearly 30 years after. The things Bill & Ted Face the Music and Borat Subsequent Moviefilm did right, though, are probably the exception rather than the rule. You’re more likely to have actors not really remembering the essential traits that made their characters fan favourites in the first place, and seeming too old or too stiff by half. 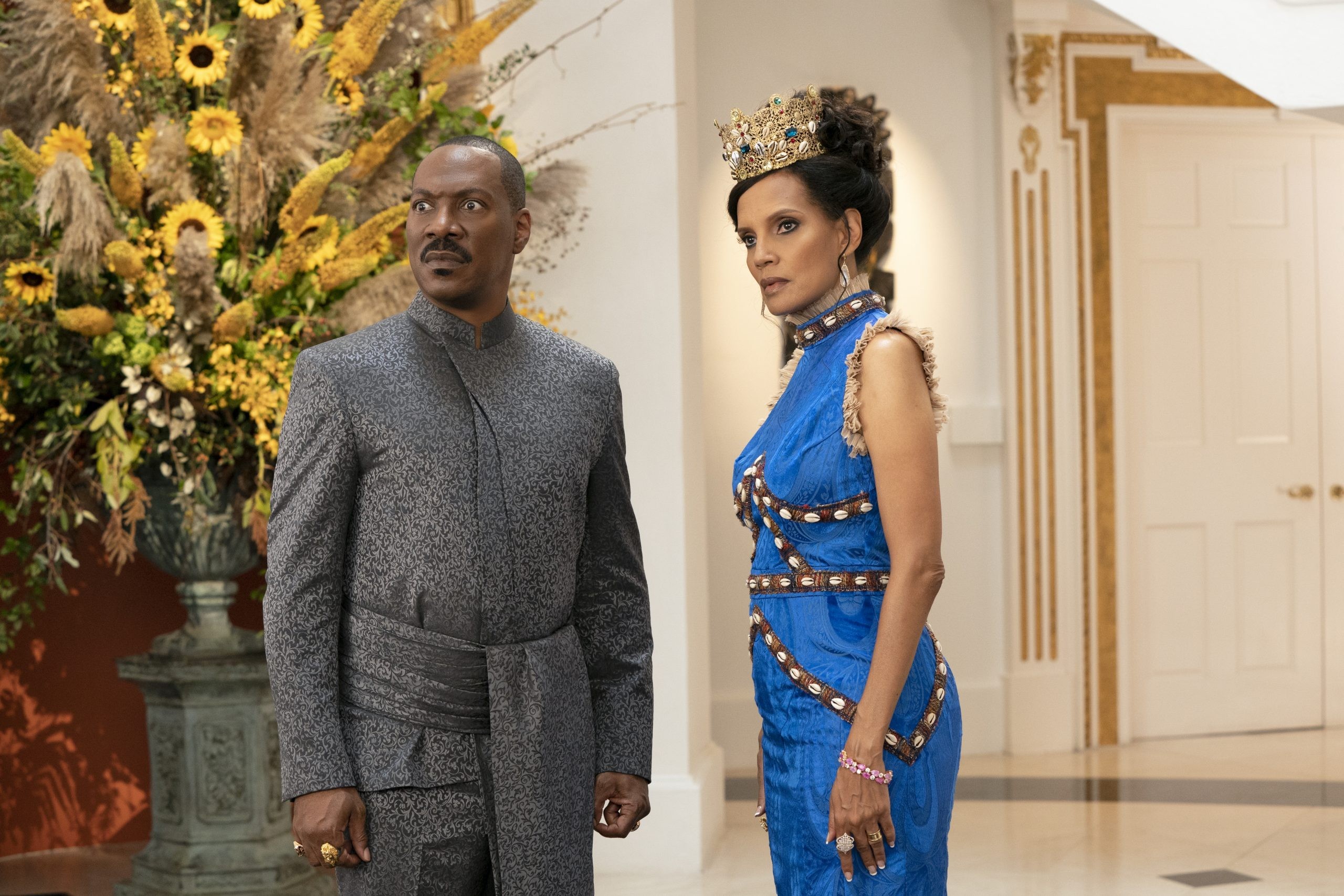 That brings us to the more typical example of such an endeavour. Coming to America was a promising candidate for such a geriatric reboot, as Eddie Murphy is still only 59, and all but one of the core cast of that 1988 hit are still with us today. (Rest in peace Madge Sinclair, who played Prince Akeem’s mother and passed in 1995.) Plus, in 2021, we could all use a little dose of Akeem’s childlike optimism and charm.

Coming 2 America, though, takes what Bill & Ted Face the Music did so well and fumbles it into a less-than result. Like the leads in that film, Prince Akeem (Murphy) and his wife Lisa (Shari Headley) are still sort of in a state of arrested progression, as they are still waiting to become king and queen of Zamunda. This certainly is a happy enough sacrifice, as it means King Jaffe Joffer is still with us, and James Earl Jones shows he can still deliver a funny line even at age 90. It also means that as in Bill & Ted Face the Music, the characters’ offspring – three very capable young women and potential future leaders of Zamunda — stand to play a big role this time around.

Where Coming 2 America missteps is by focusing on a different offspring. Akeem had never been with anyone other than Lisa – or so he thought. But on the night that he and his trusted but mischievous associate Semmi – played again by Arsenio Hall – tried in vain to find Akeem’s queen at a shady Queens watering hole, Semmi ended up bringing someone home with them after all. Due to an accidental ingestion of drugs, Akeem thought he was having a vision of being mounted by a rhinoceros. That was actually the six-footer Mary Junson, played by Leslie Jones.

Mary was, shall we say, rather loose back then, and had a son whose paternity she never knew. That’s Lavelle (Jermaine Fowler), a now 30-year-old man who still hasn’t moved beyond selling counterfeit tickets despite trying to interview for legitimate work. Semmi knew about his existence, but kept it from Akeem. Now, it’s the king’s dying wish that Akeem meet Lavelle, as Zamunda law requires a male heir to the throne. That will also make peace with the off-kilter general (Wesley Snipes) from neighbouring Nextdoria (great name), who has a bride in mind for Akeem’s heir. So it’s back to America again. 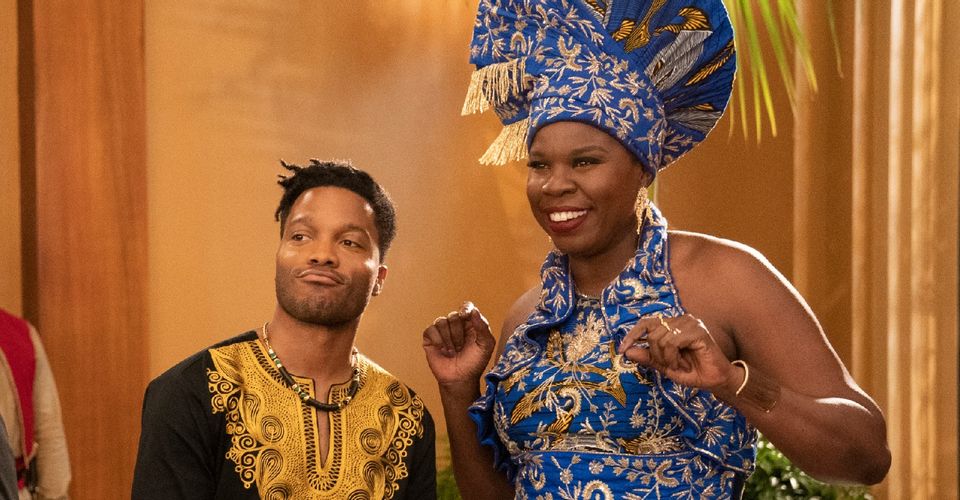 That Akeem’s eldest daughter (Kiki Layne) is the best candidate to succeed him should be obvious to anyone paying attention. The film chooses to focus instead on the red herring, Lavelle, flip-flopping from the original film which fish is out of which water, as the bulk of the action this time around takes place in Zamunda. And yes, it’s fun to watch street smart 21st century characters like Lavelle and Mary butt up against the genteel Zamundan traditions, but it would be more so if it didn’t rob precious screen time from Akeem’s daughters. By the time the clear-as-day resolution arrives, we’ve spent barely any time with them, sapping the denouement of its resonance on a character level and as a victory for progressive values.

The scattered plot – there are actually two trips to America, both of them very short – exists solely for the purpose of fan service. And to be fair, that fan service is pretty good. The original Coming to America was noteworthy for allowing Murphy and Hall to slip into multiple additional roles, with the help of Rick Baker’s legendary makeup effects. Baker retired in 2015, but a team of makeup artists has credibly imitated his work, as the three denizens of a Queens barbershop (two played by Murphy and one by Hall) are back, as are Hall’s revivalist preacher and Murphy’s lead singer of the band Sexual Chocolate. The effects are so good, at certain points you might think these were outtakes from 1988 rather than new material. 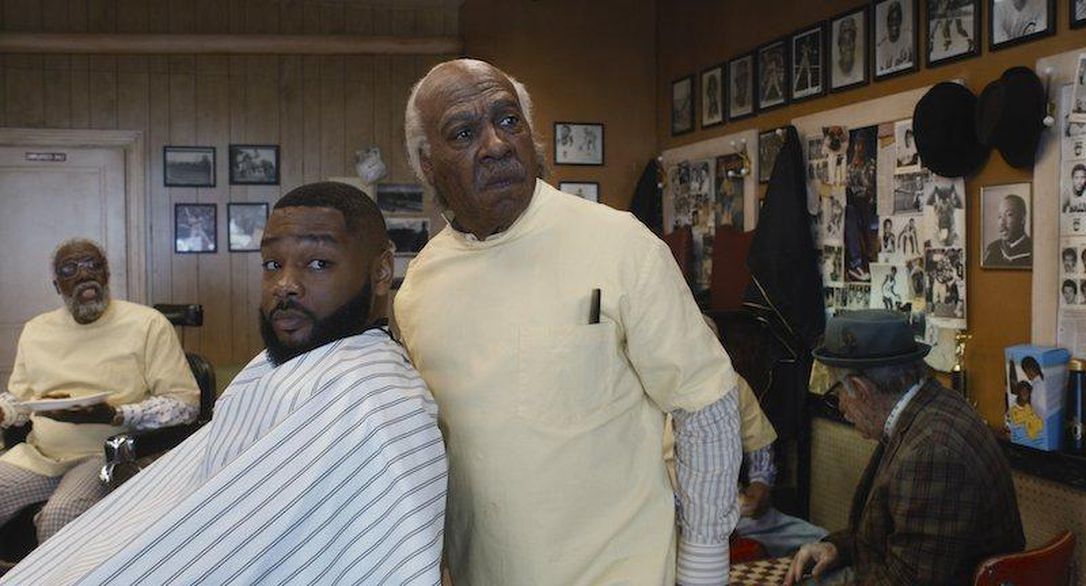 Although focusing on the Queens transplants in Zamunda might not be the right choice from a story standpoint, it does work as comedy. Jones does not have a big role here, but she makes the most of the culture clashes, while Fowler is winning enough as more of a straight man. Snipes is also a huge asset in the comedy department, re-teaming with director Craig Brewer after the 2019 Murphy vehicle Dolemite is My Name, where he stole every scene as a flamboyant director. Snipes’ preening general is having a grand old time strutting through the palace and taunting Akeem.

Brewer might be partly to blame here for not getting more out of the rest of the cast. The aforementioned stiffness is especially notable in Murphy, though Brewer did get great work from him in Dolemite. Akeem is conceived as a bit of a stiff, but there’s a physicality to Murphy’s 1988 version that manifests in small ways and communicates just how much joy Akeem gets from life. That’s not evident here, as the role is underwritten in the first place, and then Murphy doesn’t do a whole lot with it. Certain character moments also seem out of sync with the Akeem we knew 30 years ago, even if part of the movie’s message is that age and complacency can strip you of your ideals. 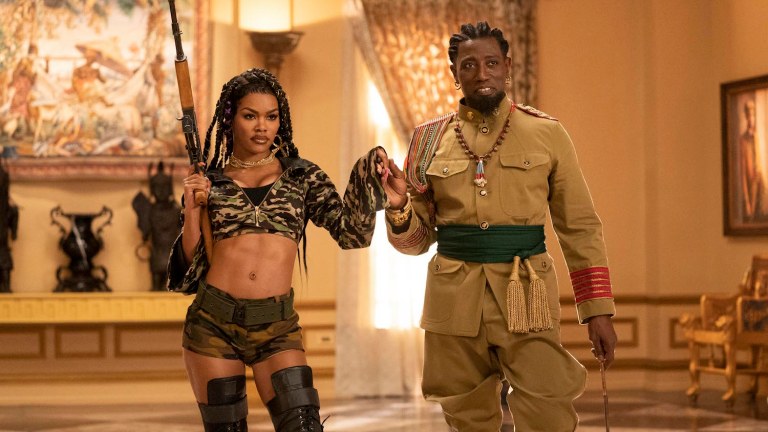 Coming 2 America needed more of Coming to America’s ideals. It ends up in the right place, more or less, but takes a flat path getting there. The movie does come alive in its production numbers, as there are dance sequences and singing cameos (Gladys Knight, En Vogue) that function both as nostalgia, and as a way of honouring the cultural tapestry that interweaves the characters from Zamunda with their American counterparts. If you strip away the narrative flaws, Coming 2 America does celebrate the right things, and duplicates its predecessor’s feat of giving us a crossover entertainment comprised almost exclusively of Black faces. It’s just that Akeem’s daughters, loyal and brave and true, deserved to play more of a role in that celebration.