"It’s 'love,' as some abusive men see it, that cause them to perpetrate such horrors on the objects of that love."

"Do we have the right to accuse a religious person of mental instability?"

Jason Blum’s “horror on the cheap” standard operating procedure gets a tantalising new incarnation with Evil Eye, the third of an eventual eight films to be released in his series for Amazon Prime, Welcome to the Blumhouse. It’s chilling while relying on absolutely no effects, special or otherwise. It was shot in New Orleans, but convincingly appears to take place partly in India. It’s this kind of “trickery,” so to speak, that has made Blum a modern-day master of horror for the masses, but also very rich. It also makes Evil Eye well worth a watch. An “evil eye” is, according to the traditions of several religions, a curse placed on a person that steadily unravels his or her life. There are trinkets and bracelets and other methods of warding off such a curse, but it’s a persistent menace that won’t be denied. Usha (Sarita Choudhury), the mother of a nearly 30-year-old daughter, believes that such a curse was placed on her by her abusive ex-boyfriend, who continued to torment Usha even after she was married to a new man and pregnant with that daughter, Pallavi (Sunita Mani). Thirty years later, Usha might not still be worrying about it except that on the night she was cursed, the night her ex slammed her head into a Delhi bridge railing, she also managed to knock him off the bridge, where he fell to his death.

The family moved to America, but Usha and her husband ultimately returned to Delhi. Pallavi did not. She’s been living a fully western existence in New Orleans, except for the fact that as a 29-year-old, she’s receiving pressure to get married. In her culture, reaching 30 without getting married earns you a stigma that makes any future prospects of marriage all the more unlikely. So the ever meddlesome Usha tries to set her up on a date with an eligible Indian bachelor in New Orleans, only traffic prevents him from arriving on time. In the meantime, Pallavi catches the eye of Sandeep (Omar Maskati), a wealthy, handsome and charming bachelor sitting in the same café where Pallavi was waiting.

Usha should be happy that her daughter may have found husband material, but she’s starting to get a sixth sense about the dangers this man poses. She’s worried this is somehow the fulfilment of the prophecy of the evil eye placed on her. Usha’s husband, Krishnan (Bernard White), worries that it is really just the trauma of Usha’s former abuse coming to a head. Her daughter, only now learning of that trauma, is convinced her mother just can’t bear to see her happy.

Twin brothers Elan and Rajeev Dassani have directed the film from a script by Madhuri Shekhar, from her audio play of the same name. It also bears the producing muscle of Priyanka Chopra Jonas. The Welcome to the Blumhouse series is meant to focus on “family and love as redemptive or destructive forces,” and Evil Eye fits that theme to a T. The film finds a terrific way to combine Horror, with the capital H of the genre name, with the lowercase h “horrors” of domestic abuse perpetrated by domineering men in a patriarchy. It’s “love,” as some abusive men see it, that cause them to perpetrate such horrors on the objects of that love. 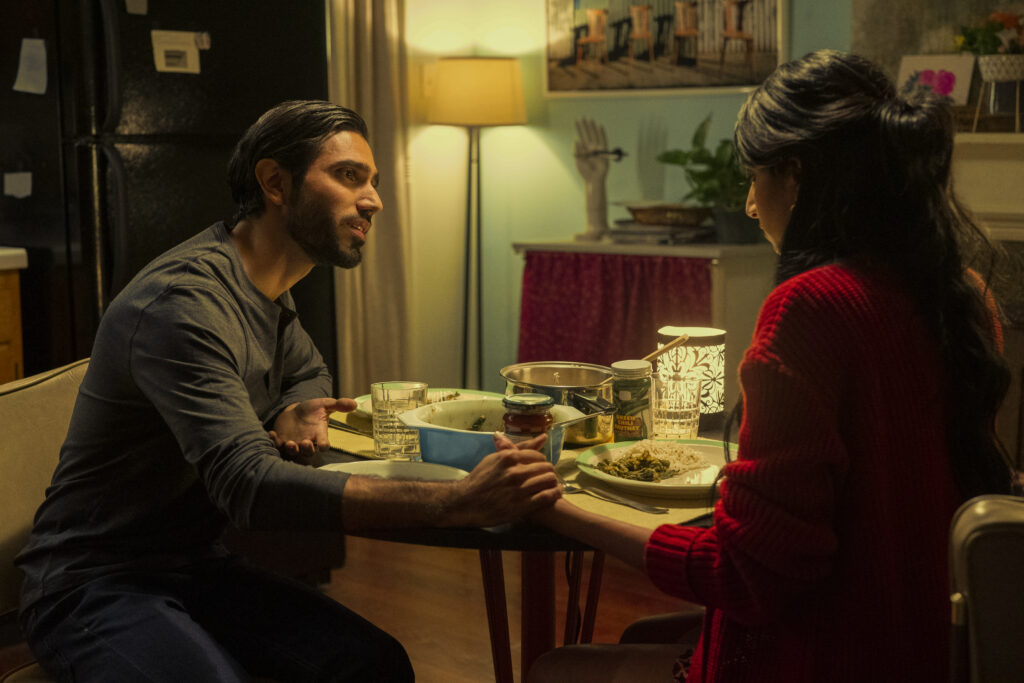 One of the film’s big interests is to prod that meeting point between the supernatural and the natural, the religious and the secular. Pallavi values her religious heritage, but when her mother warns her that an evil eye may be interfering with her life, it breaches the former boundaries of her credulity. Both she and her father think Usha might need to see a doctor if she really believes what she says she believes, in part because it may now be a diagnosable disorder resulting from her past abuse. But isn’t this the nature of religion? You believe things for which there is no proof? Do we have the right to accuse a religious person of mental instability?

These questions might not be as interesting as they are if not for the performances of the cast and the time the Dassanis have taken to develop their characters. Divided as it is between America and India, the film might logically have one main set of relationships while the other is clearly secondary. Smartly, the relationships are given equal time, as we come to understand the decades-old dynamics between Usha and Kishnan no less than the developing interaction between Pallavi and Sandeep. Of course, the most compelling relationship is probably between mother and daughter. They Facetime almost daily and have that familiar rapport of a nagging, traditional mother and her dutiful but gently rebellious daughter. It’s fascinating to watch as these roles that they play, almost as though enacting some timeworn stereotype of intergenerational love, crumble into something fraught with true emotional peril. 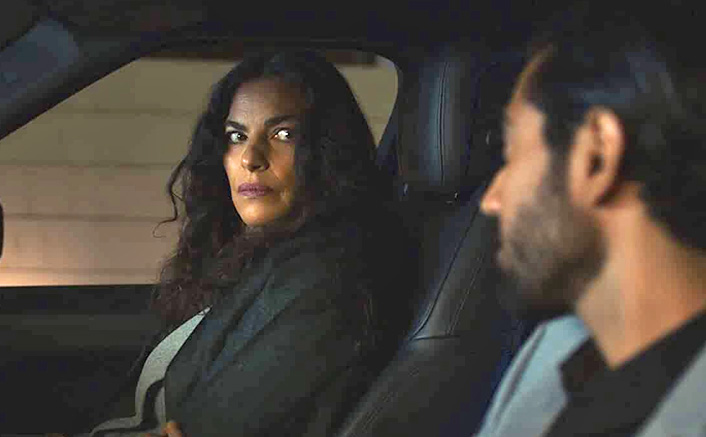 Given that we’ve already told you there are no CGI ghouls or other visual incarnations of an “evil eye,” it’s hard to talk too much about the film’s horror elements without giving too much away. As you’re watching, you may actually guess what’s happening well in advance of it being revealed. The ultimate compliment to Evil Eye, though, is that figuring out what the film is doing doesn’t hamstring the exploration of its themes. In fact, it may improve our understanding of how abuse continues to pass down through the generations, a curse we can never fully escape.