"There are a bunch of ugly people in Nash Edgerton’s woeful new film, Gringo, and the film is totally clueless about how to deploy them."

"You don’t have to squint much to see a funny idea in Gringo."

Watching reprehensible characters can be fun as long as you’re enjoying the ways they’re reprehensible. If you’re not, it’s just spending too much time with ugly people.

There are a bunch of ugly people in Nash Edgerton’s Gringo, and the film is totally clueless about how to deploy them. One scene stands out as a perfect example. It involves three reprehensible people and only those three reprehensible people. One of them is the director’s brother, Joel Edgerton, playing the shifty bro who heads a pharmaceutical company. Another is his co-president, played by Charlize Theron, who is as openly awful as he is privately awful, and is also having sex with him. The third is another person Edgerton’s character is having sex with, played by Thandie Newton, who is the wife of one of the non-reprehensible characters (David Oyelowo, our protagonist). 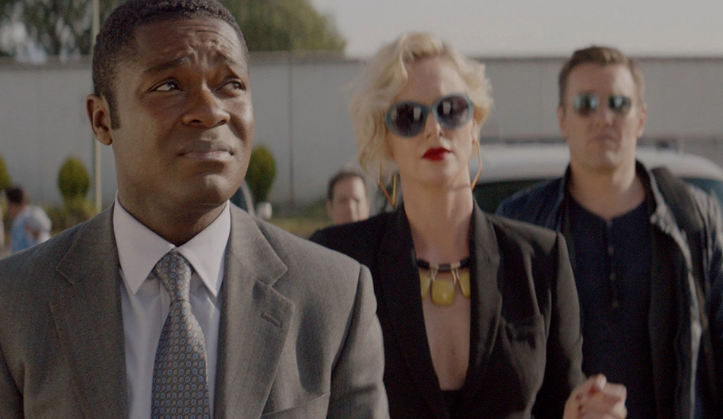 The scene is about nothing other than the fact that Theron’s character catches Edgerton’s character two-timing her with Newton’s character, who is herself two-timing Oyelowo’s character. For about five minutes the director explores the dynamics exclusively between characters we actively dislike. The movie understands we’re not supposed to like them, but not that we only spend time with unlikable people if they’re unlikable in fascinating ways. These people are unlikable in dull ways. They’re just toxic and self-involved and loathsome. That’s no fun.

And Gringo thinks it’s fun. But it has about a dozen similar scenes that could have been cut right out and made a much better movie. Then again, it’s debatable whether the remaining scenes would have made much of a movie either. The script by Anthony Tambakis and Matthew Stone doesn’t have a clue, and its tone swings wildly between slapstick comedy and darker violence. Most criminally, Edgerton cut his teeth as a stunt man, and there aren’t even any good stunts. 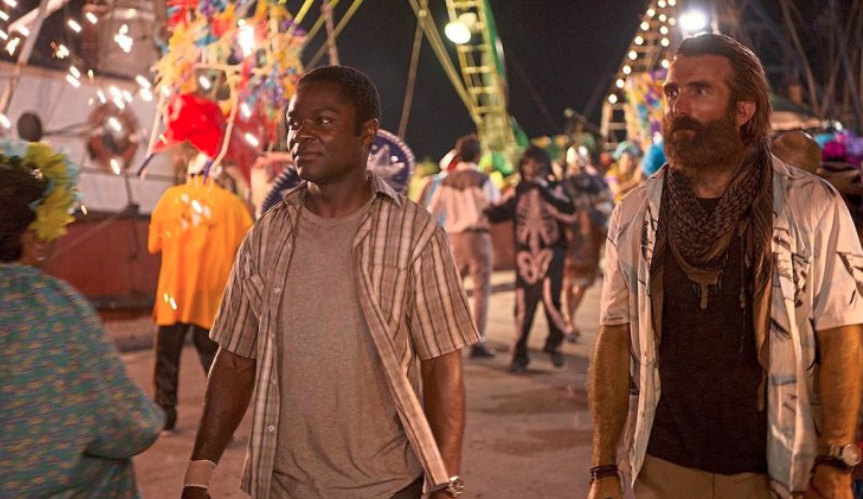 The story concerns Harold Soyinka (Oyelowo), who is referred to alternately as an American and a gringo, both of which seem like strange assignations given that he has a strong Nigerian accent and lacks the lily white skin the term “gringo” usually implies. That’s just one of the fundamental ways this movie starts out on the wrong foot.

Anyway, Harold has a role in operations at the pharmaceutical company that requires him to oversee a Mexican laboratory where the company’s latest product is being manufactured and tested. Harold doesn’t know it, but his sketchy bosses have been raising some capital off the books by supplying the product – a medical marijuana pill – to the local cartels. What the cartels would want with something so borderline legal, which could theoretically receive approval from the US Food and Drug Administration given that country’s move toward legalisation, is uncertain. More lost points for Gringo in the realism department. 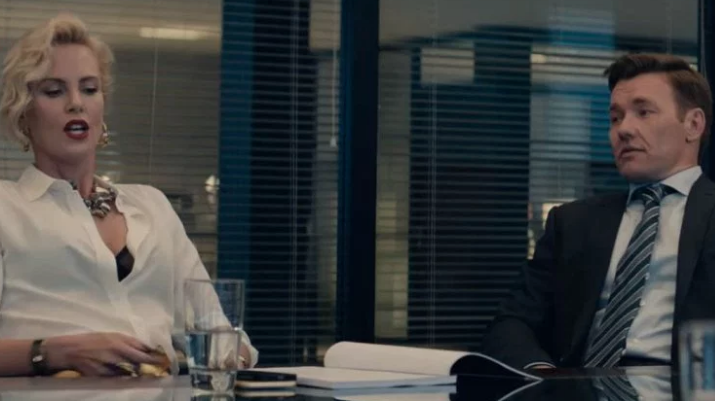 Anyway, Harold finds out that the company might be merging with another company and that his job might be on the chopping block. Combine this with his huge amounts of debt and the revelation this his wife is cheating on him (a revelation she delivers over Skype while he’s in Mexico), and Harold senses an opportunity to fake his own kidnapping and see if his bosses will pay the ransom. Little does he know that real cartels have mistaken him as “el jefe” and are bent on actually kidnapping him as a means of securing the formula for the medical weed.

You don’t have to squint much to see a funny idea in Gringo. Zany trips through Mexico in and out of the hands of hapless kidnappers has the potential for comedy gold. Unfortunately, Edgerton has no idea what to do with that idea. It’s not funny at all. As discussed earlier, he spends way too much time with characters back in the U.S. we don’t care about, as well as on a barely related side plot whose only benefit is that it features the charming Amanda Seyfried. 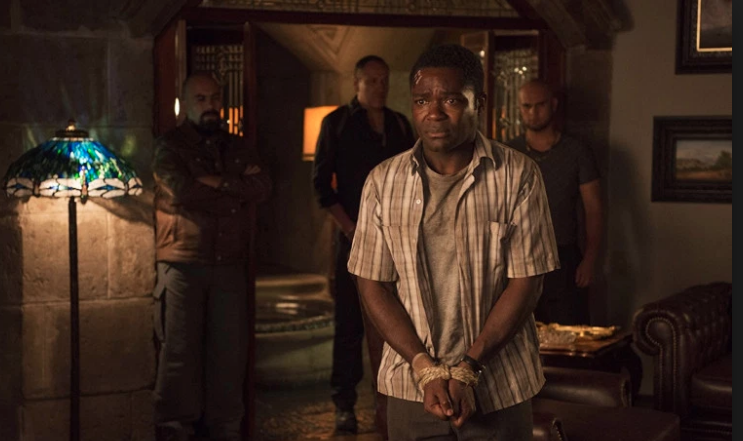 The issues in Gringo are from the top down, and that means they can be traced back to Oyelowo. Oyelowo is a tremendously charming actor and a real talent, but he’s the wrong choice for this role. The movie is essentially about a guy being set up as a patsy for some sleazy businesspeople. Colour blind casting is great, but when the main character is not only black, but also of African descent, it begs for some kind of exploration of the role of race in all of this. None of that is there, or if it is, it’s in the form of weirdly off colour analogies, such as Edgerton’s character talking about the gorillas who were happy eating carrots until one of them was given a banana by their keeper. If this is supposed to demonstrate Edgerton’s racism, it doesn’t do it clearly enough, so it just kind of leaves us feeling icky.

Oyelowo is wrong for the role because his attempts at broad comedy only draw attention to how poorly the comedy is written. That’s meant to be a compliment. This is a man who has played Martin Luther King Jr. (Selma) and an African prince (A United Kingdom) just in the past couple years. When Edgerton asks him to wail and cry and panic, as he does a couple times, it is not only beneath him, but feels tone deaf. Especially given all those analogies about gorillas. 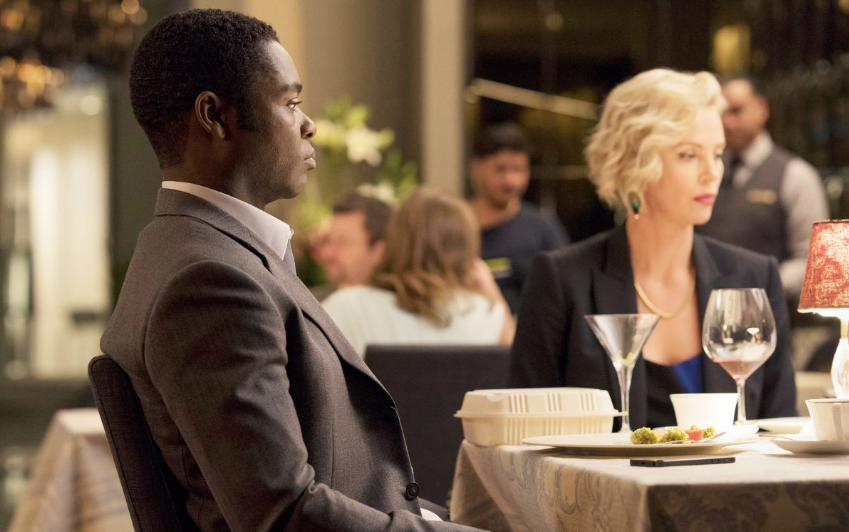 Speaking of roles that are beneath people, it’s truly dispiriting to see Charlize Theron’s work here after she was so good last month in Tully. She’s the very embodiment of a dumb American, putting an O on the end of English words to “Mexicanize” them and calling a man named Sanchez “Suarez,” merely to demonstrate how little she cares about him as an individual (or anyone of his ethnicity). There’s a part where she and Edgerton make fun of overweight people as well. The script doesn’t trust us to understand how bad these people are so they have to continue proving their badness in every line of dialogue. Theron should have taken one look at that script and known better.

If the movie were just a failed comedy it would join a sizeable refuse heap of failed comedies. But an essential miscalculation makes it a lot worse than that. Edgerton thinks this film is some kissing cousin of Sicario, as he includes a fair bit of the real retributions cartels deliver to keep their various business associates in line. You can’t make a wacky comedy about hapless criminals if the criminals are then being killed in brutal ways. The two things just don’t fit. Gringo doesn’t fit anywhere except atop its own refuse heap.