Watching a Pedro Almodóvar film is like drinking a bottle of hyper-coloured Powerade. Silky, sweet, and revitalising. Always a welcome relief to the exhaustive lameness of Hollywood. When I watch one of his dazzling films I usually just sit back and let the seduction work its sexy magic. The best thing about this is that it’s always a satisfying experience.

I’m So Excited! is set predominately on-board a flight from Madrid to Mexico City. Due to a technical malfunction, the plane has stalled in its trajectory and now circles aimlessly above Toledo, waiting for an available runway to perform an emergency landing on. As the plane spirals, so do its passengers. To maintain a level of control, three gay stewards decide to drug the entirety of economy class. They are then left to entertain and distract an unruly bunch of business class passengers who demand to know what’s going on. What ensues is a sometimes funny,  mostly disengaging sequence of events. 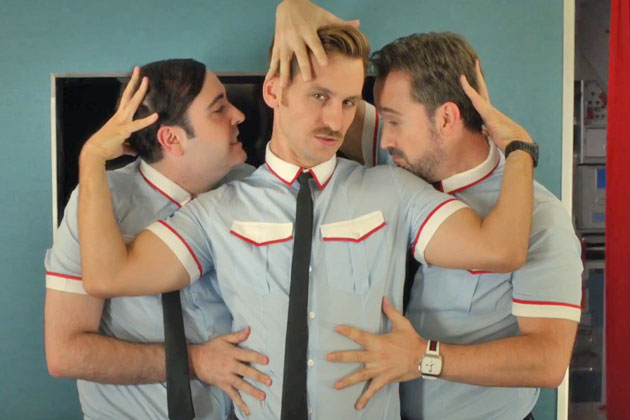 I tried hard to love this film. I really did. But instead of hyper-coloured Powerade, the experience was more like drinking a bottle of expired lemonade; flat, despite a deceptively appealing exterior. The film isn’t deliciously queasy in the way The Skin I Live In is, nor does it achieve the offbeat sincerity of All About My Mother, and Bad Education tears it to shreds when it comes to sexual provocation. But I shouldn’t be comparing this film to Almodóvar’s previous efforts. It doesn’t seem fair as they are usually separate in their uniqueness. However, it’s just that in total, the film lacks the edge or vitality of his other work. It doesn’t fully satisfy. It may contain hints of his trademark irreverence and meticulous colour design, but really, that’s about it.

To write positively though, the film does have its fair share of funny moments and benefits from some truly comedic performances. The trio of gay stewards played by Javier Cámara, Raúl Arévalo and Carlos Areces are fiercely camp and enjoyable to watch. The string of supporting characters, despite being only half-drawn, play their parts to a tee. There’s a virginal clairvoyant obsessed with sex, a slickly moustached hit man, a couple of druggy honeymooners, a snobbish escort, a mysteriously straight businessman, a dodgy actor, and two bisexual pilots. Despite this entertaining ensemble of oddballs, I usually expect a farcical comedy to be so outrageous or so weird that any recognisable storyline becomes deliberately redundant.  Unfortunately, the films hilarious moments are too tame, and awkwardly interrupted by boring, off-plane attempts at narrative.

I find that Almodóvar’s films naturally lend themselves to subjective viewings. They are sensual and different. Some people might not feel comfortable with his scrupulous eye for detail or his deep sense of melodrama. That’s fine. However, when it comes to I’m So Excited!, I feel painfully right in saying that it’s an objectively disappointing film. He simply missed the mark a bit on this one. It doesn’t fully live up to its satirical ambitions. It almost does. But when it comes to satire, almost is not enough.