The basic concept of Frankenstein’s Army—a found footage horror film, set during the Second World War—is undisguisedly ridiculous. I don’t know anything about the history of cameras, but surely whatever they had available in 1945 would be far too heavy to allow for all the running up and down which these films require. Regardless, as more than a few reviewers have pointed out, that’s the least of Frankenstein’s Army’s absurdities. It follows a group of Russian soldiers who stumble upon the laboratory of Doctor Frankenstein, a descendant of Mary Shelley’s tragic genius. This Frankenstein has rather less pathos about him, perhaps because his own creations are unfailingly obedient. He certainly has more of a sense of humour. A Jew, the Nazis freed him from the camp in exchange for an army of half-human, half-mechanical monstrosities. He’s gone rogue, however—and now Stalin wants him alive, promising amnesty and an endless supply of dissidents to experiment on. The soldiers don’t know this, however, except for the cameraman, Dima, a commissar attached to the group.

There’s not much to be said for the characters. They’re all war movie archetypes—the psychopath, the tough moralist, the rookie. Dima is slightly more interesting. At least he’s given a reason for filming everything: the Party is holding his parents hostage, and presumably they want a complete record of the mission. His attitude towards Communism vacillates humorously from anger and resentment to fanatical loyalty. Frankenstein is played by Karel Roden, who appeared in a fairly similar role as Rasputin in Hellboy. He’s touchy, self-obsessed, and erratic, to say the least. 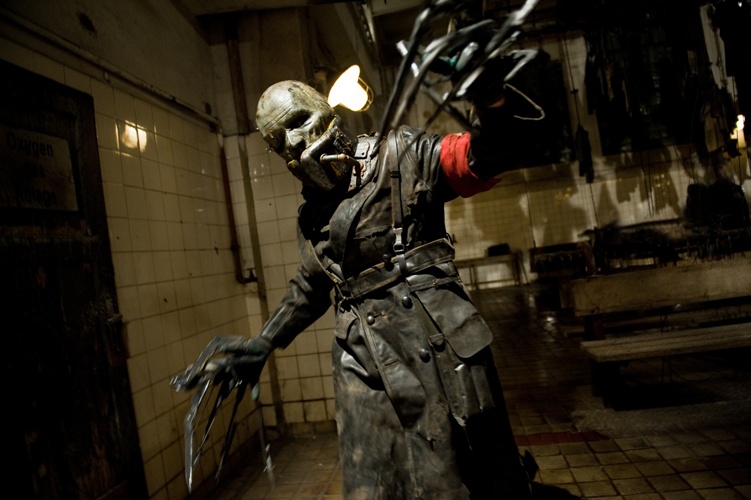 The monsters have quite a bit more personality than the human cast. They range from the comical to the terrifying; many are both. My personal favourite was a clumsy hulk with an aeroplane propeller for a head; it spontaneously combusts within moments of appearing. One wonders what it was designed for in the first place. These creations affirm indisputably that animatronics and costumes will always surpass CGI. Even something which looks silly and fake is more impressive than its digital equivalent, purely because it’s a tangible object in the world.

The film’s middle act is a long chase through the dim corridors of Frankenstein’s fortress. It feels like a haunted house ride—exhilarating but not at all scary. It’s in its last third, however, that the film becomes truly captivating, as Dima stumbles upon the Doctor’s enclave and is given a private tour of its horrors by the man himself. The tone of the film becomes measured, dreamlike, developing into almost unbearable dread. There is a magnificently tense scene in the final act in which Dima frantically attempts to negotiate a deal with the Doctor, as Russian artillery crashes overhead.

Vitally, Director Richard Raaphorst pulls off the tricky feat of tying the viewer sympathetically to Dima, even though he’s not, in himself, particularly sympathetic. We feel a little bit of his terror. Not quite an hour and a half in length, the film seems substantially shorter, in a good way. It ends abruptly, like a feverish trance. Provided you can handle the sight of a few brains here and there, Frankenstein’s Army is a real thrill.