"Incredibles 2 seems here for the right reasons, which is to provide us a helluva fun time."

"This is just a pure injection of fun, full of set pieces that are logistical masterstrokes and visual gags that don’t quit."

Merchandising considerations alone seem to blame for the world getting a Cars 3 before it even got an Incredibles 2. But now that the Incredibles sequel has finally arrived, Pixar seems determined to have a more favourable merchandising line this time around. In addition to the five members of the Incredibles family and the Samuel L. Jackson-voiced Frozone, we get a ragtag team of other superheroes and supervilliains, many of whom could potentially work well as action figures. Check your cynicism at the door, though – Incredibles 2 seems here for the right reasons, which is to provide us a helluva fun time.

The delay in an Incredibles sequel is perhaps more surprising given what’s hit the cinematic landscape since the original came out in 2004: Namely, the entirety of the MCU. The Marvel Cinematic Universe properly launched about four years after The Incredibles, and has churned out 19 movies before Pixar has released even one Incredibles sequel. While Pixar may have thought the world no longer needed its contribution to the superhero genre, the MCU also set a particular challenge for Pixar when it did get around to Incredibles 2, since we are all just about superhero’d to death at this point. The “cram em in” mentality behind such movies as Avengers: Infinity War does seem to inform the thinking behind Incredibles 2 with its spate of supporting heroes. However, it also gives Pixar something from which to distinguish itself, and the studio does so, slyly. 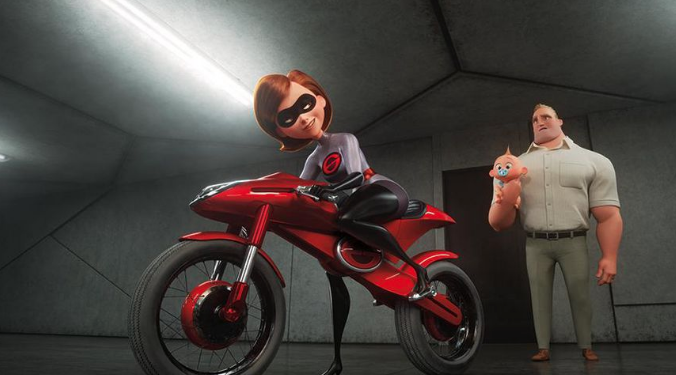 Like the Cars movies, the Incredibles movies fall into that other camp of Pixar’s creative output – you know, the ones that aren’t designed to jerk tears out of you. And while it seems like a smart choice just to keep it fun, that choice does leave Incredibles 2 feeling a little short in terms of its ambition and/or social relevance. Because it is so much fun, though, we’re more likely to overlook the slightly tired aspects of some of the plot. For example, how many superhero movies take place in a world where superheroes have been outlawed? The Incredibles might have gotten there first, but now they have the duty of doing something different, and Incredibles 2 does not always deliver in this regard.

What it does do, however, is look terrific. This is a Rolls Royce of a movie, and the 14-year delay seems worth it if only for the upgrades in technology. The retrofuturistic look of this series really pops, even more so than it did the first time around, when it looked plenty good. Brad Bird has returned to the director’s chair and given the movie the same zippy pacing and fantastic set pieces that fuelled the original. On a purely physical level of visual stimulus, Incredibles 2 is a joy.

It’s not long after the events of the first movie, as Jack Jack is still a baby, Violet still a teenager and Dash still a precocious approximately ten-year-old. This means that superheroism is still illegal, so Mr. Incredible (voice of Craig T. Nelson) and his wife, Elastigirl (voice of Holly Hunter) must still be extra certain to wear their masks to avoid recognition when leading their family into the dangers of one super threat after another. But instead of socially progressive vigilantism, a tech billionaire (voice of Bob Odenkirk) and his design whiz sister (voice of Catherine Keener) want to legalise superheroism again by attaching body cameras to the suits of superheroes. See, the theory is that the public doesn’t see the ways they’ve tangled with the various supervillains; they only see the mess left afterward.

A little positive PR through video evidence might help return these superheroes to legitimacy, or so the thinking goes. But given that bull-in-a-china-shop Mr. Incredible is responsible for the lion’s share of these messes, the tech company believes his less destructive wife would be the perfect candidate to try out the body cameras and work to restore the good names of superheroes. That leaves Mr. Incredible feeling a lot more like Bob, his alter ego, as he stays home as a single dad trying to negotiate his daughter’s boy problems, his son’s maths homework and his baby’s inability to control a host of super abilities just starting to present themselves. 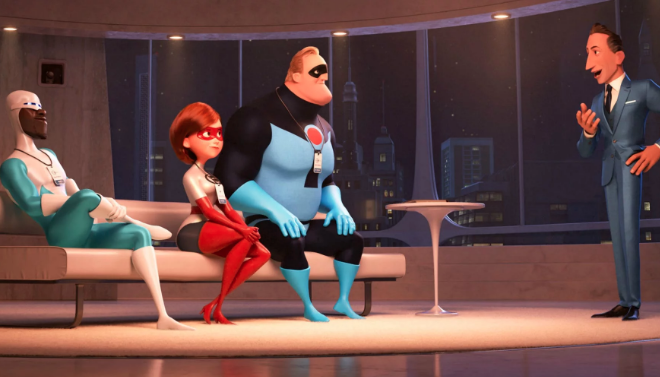 While Incredibles 2 does not have a clear message, it’s certainly topical. The body cameras are a nod to current law enforcement initiatives to strap police officers with cameras, for one. The supervillain in this instalment is called Screenslaver, and his ranting ideology surrounds the ways our screens turn us into thoughtless zombies. And Pixar is sure to be on the right side of the Hollywood gender representation debate, not only making Elastigirl a strong female character, but actually sidelining her husband almost entirely. (He’ll have a role to play, of course, but for most of the movie, the emasculated superhero does indeed change nappies and search vainly for the right type of batteries.)

Because none of these ideas really take flight as a unifying theme, they do leave the movie feeling a tad aimless at times. Everything else is so good, however, that it really doesn’t matter. This is just a pure injection of fun, full of set pieces that are logistical masterstrokes and visual gags that don’t quit. 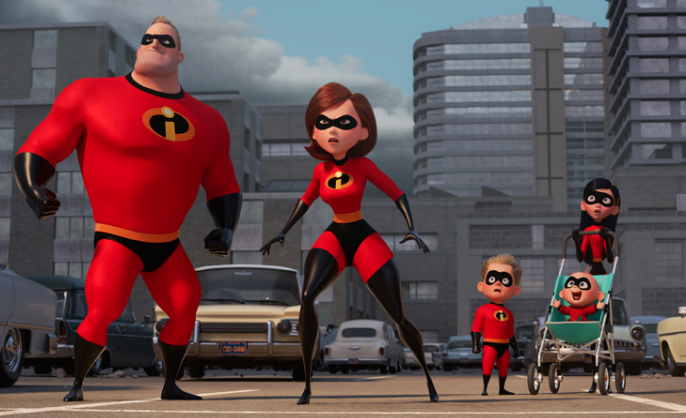 Much of the humour surrounds the way Jack Jack is coming into his powers, especially since he seems to have just about every power a hero in this world has ever had. One day, he’ll be the most incredible of the Incredibles. Today, however, he’s still vulnerable enough that when he suddenly shoots into the sky like a bottle rocket and bursts into flames, his beleaguered dad actually needs to scurry desperately to catch him before he hits the ground. The tension behind this is fun and it gives the animators their greatest chances to flex their creativity.

Perhaps the most impressive thing about Incredibles 2, especially as distinguished from most of Pixar’s recent sequels, is that there is no appreciable dropoff from the original. That’s really saying something, considering that many people cite The Incredibles as among the studio’s very best.