"The movie starts out really sure-footedly, in part because its heroine is so sure-footed."

"But delightful escape sequences and punch-ups can only take a movie so far. At some point, it has to adhere to that deeper mythology lurking in the background."

When you come right down to it, the word “amusing” is a pretty backhanded compliment for something that’s supposed to entertain us. “Amusement” is better than “bemusement,” which skips past passive-aggressive straight to aggressive-aggressive. But there’s a mocking quality to “amusement,” as in the teacher who asks the student: “Oh, so you think I’m standing up here for your amusement?” Surely that teacher is not, and surely that student’s amusement is a cruel response to that poor public servant’s best efforts. 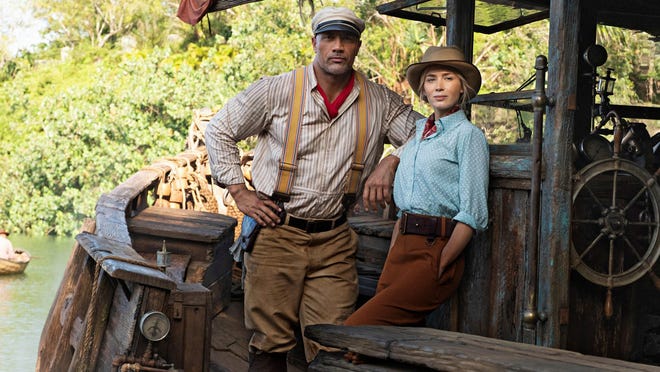 I’m telling you all this because “amusement” is part of the term “amusement park,” which is not supposed to be a place of sarcastic enjoyment. You’re supposed to really have fun at an amusement park, but it’s telling that there are half measures in the etymology of the term. Disney World and Disneyland, and all the non-American incarnations thereof, are amusement parks, the same places that spawned the ride that inspired five Pirates of the Caribbean movies (to date), and also the ride that inspired Jungle Cruise, Disney’s latest blockbuster to debut simultaneously in cinemas and for a premium access fee on Disney+. But the half-fun implied by the term “amusement” is instructive as a descriptor for Jungle Cruise, and those halves can be divided by the two halves of its running time. (Too much of a stretch with this setup? Don’t worry, we’re on to the review proper now.)

The movie starts out really sure-footedly, in part because its heroine is so sure-footed. In the opening scenes of Jungle Cruise, we’re treated to Dr. Lily Houghton (Emily Blunt) sneaking through the deepest chambers of a 1916 London explorers society, to abscond with an arrowhead that will lead her and her brother MacGregor (Jack Whitehall) to a legendary location in the Amazon. She believes in the myth of the Tears of the Moon, a Brazilian tree whose purple petals can cure any illness. She had asked for funding for an authorised mission, but when the society laughed her out of the building, she had to resort to other means. With her nimble feet, quick hands, and the help of one of those ladders that rides along the sides of bookcases, she escapes with her quarry, and she and her brother set their sights for South America.

Even with the arrowhead, though, finding the Tears of the Moon will be no easy feat, which is where Frank Wolff (Dwayne Johnson) comes in. He’s been scamming tourists by taking them on a jungle cruise complete with apparently lethal threats. But the natives shooting darts at them enter when Frank signals them, and he even has a domesticated jaguar to instil fear, from whom Frank is only too happy to save them. He senses a new mark with the arrival of Dr. Houghton and her effete brother, but their trip through some of the roughest parts of the river may contain dangers Frank hasn’t sprung in advance. For one, they’re being pursued by a German prince (Jesse Plemons) who also wants to get his hands on the Tears of the Moon – and has a U-boat to help him accomplish that goal.

Like the ride that inspired it, Jungle Cruise has plenty of momentum and genuine thrills when it first starts out. Director Jaume Collet-Serra orchestrates the opening set pieces, particularly the one in the explorers society, with a really contagious energy, almost a Rube Goldbergian logic to how they play out. This perfectly keeps with the film’s family friendly tone, which is meant to approximate the sense of danger while keeping everything within the realm of something that might happen in a Buster Keaton movie. Blunt is a perfect performer to sell this, and when Johnson joins her upon the action shifting to South America, it’s a match made in tonal heaven. After all, he’s the veteran of a couple of Jumanji movies, with which this shares quite a lot of DNA. At this stage in his career, he really knows how to be both funny and charming.

But delightful escape sequences and punch-ups can only take a movie so far. At some point, it has to adhere to that deeper mythology lurking in the background. Much like the Pirates of the Caribbean ride, the Jungle Cruise ride has only the faintest traces of a narrative, so all that must be supplied by the screenwriters – though there are narrative Easter Eggs for those familiar with the ride. The story they’ve established is not a bad choice, so much as it invites a lot of uneven CGI that constitutes a regrettable departure from the practical joy of the early scenes. For every cursed conquistador with snakes or bees coming out of his body, which looks good, there’s a green screen or other effect that looks really quite bad. The inconsistent visual quality is perhaps the film’s most surprising miss.

Another detracting quality is the relationship between the characters played by Johnson and Blunt, which is not to say they don’t have chemistry or work well together. They do. It’s just that the filmmakers are caught betwixt and between on what they want these characters to be. Blunt’s Lily is obviously intended as a proto-feminist – Frank nicknames her “Pants” because she’s the only woman he’s ever seen wearing slacks – but the script fails her in certain key ways. Perhaps stuck too much in the Disney princess mentality, the script has made her romantic interest in Frank a much larger percentage of her concerns than we would hope for a woman pursuing scientific breakthroughs that could revolutionise medicine. (Her brother MacGregor, the first Disney character to acknowledge his own homosexuality, is a bigger win in the film’s desired progressive values.) 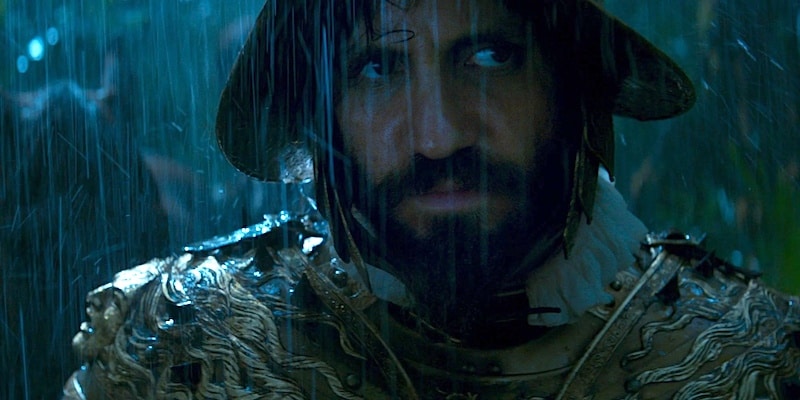 Johnson’s Frank, meanwhile, has a similar sort of bait-and-switch problem. He’s set up as the Han Solo, the guy who has to demonstrate (mostly harmless) bad intentions about a half-dozen times before his intentions inevitably become good. However, there’s a mid-film revelation about his character that totally recontextualises him, rendering some of his previous actions and motivations improbable at best and bullshit at worst. That revelation is in keeping with the larger scale scope of this type of adventure fantasy, but it comes at the expense of a character whose crooked grin and awful dad jokes were really winning us over. 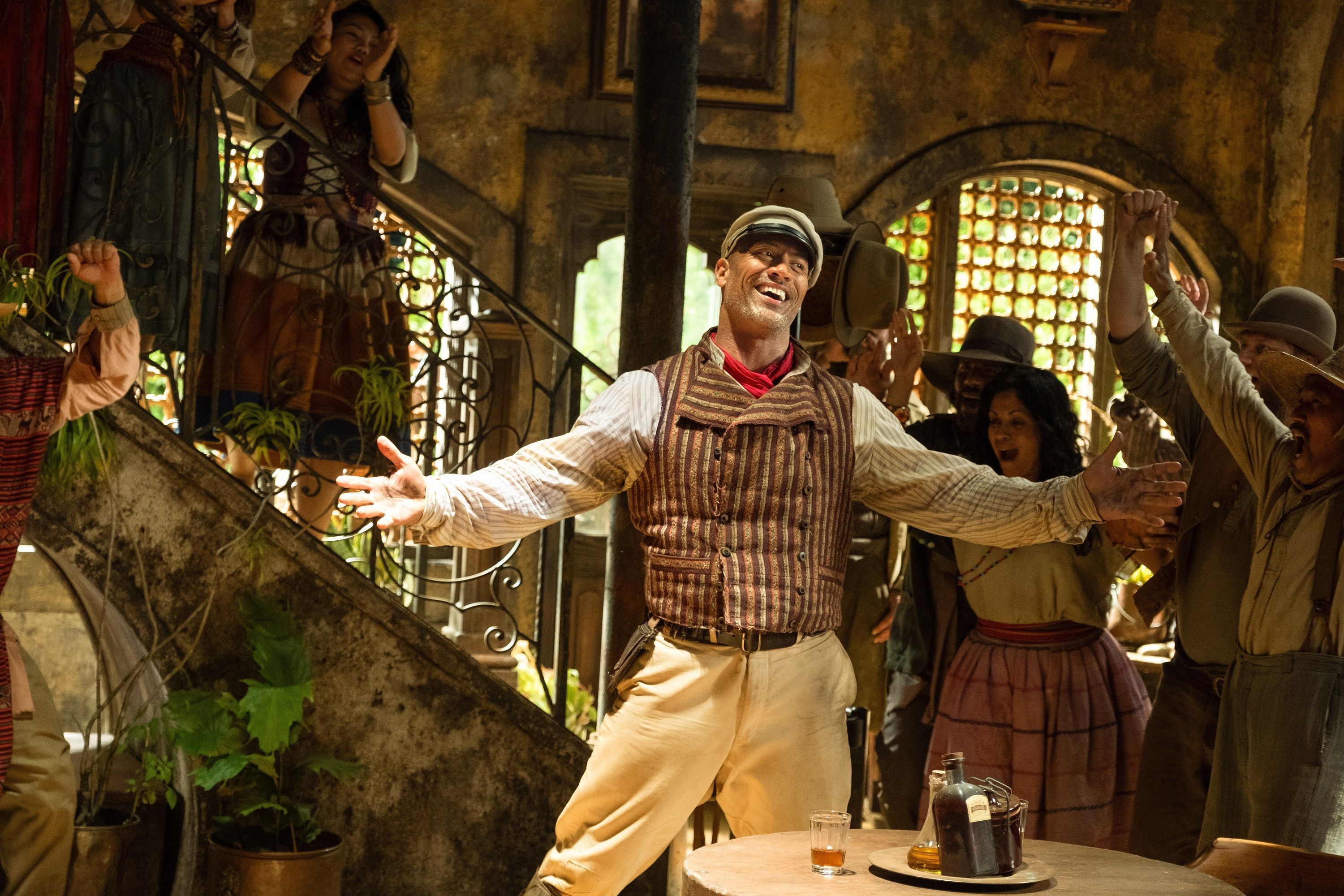 Jungle Cruise is not overly long – at two hours and ten minutes, it’s about the length you might wait in line for that ride on the busiest day of the year. But just as we’d all prefer a shorter queue, we’d also all prefer a quicker movie if it’s the back end that’s going to feel drawn out and take us off course. The twists and turns of this particular riverboat ride are not all welcome, though it’s probably worth waiting in line for those that are. At the very least, it’s amusing.

Jungle Cruise is currently playing in cinemas and for a premium $21.99 rental fee on Disney+.