"A really likeable group has been assembled here, filled out by bit players with intersecting story arcs in the manner of that overstuffed Christmas stocking called Love Actually. "

"When everywhere you look there’s a funny person trying really hard to entertain, you can’t help but feel a bit entertained."

“Wait,” you’re saying, “didn’t David Brent already have a movie this year? Yeah, he totally did – it was called David Brent: Life on the Road, and it came out in August.” That may be true, but Office Christmas Party is not actually related to Ricky Gervais’ classic cringe comedy or its longer-running American remake (or any of the half-dozen remakes in other countries). Here, the word “office” is being reclaimed to refer to any working environment, whether in a paper company or not. And though Gervais’ show (and its spinoffs) had any number of memorable Christmas episodes, none of them were quite like this.

Office Christmas Party, directed by two veterans of this type of movie (Josh Gordon and Will Speck), is a crass commercial enterprise to its core. If The Office is the Pogues’ Christmas song “Fairytale of New York,” then Office Christmas Party is the Mariah Carey version of “All I Want For Christmas is You” (which may actually appear on the soundtrack, if memory serves). That doesn’t mean the movie is without charm or enjoyable moments, it’s just you’ll have to sift through a lot of formula and false starts to get there. 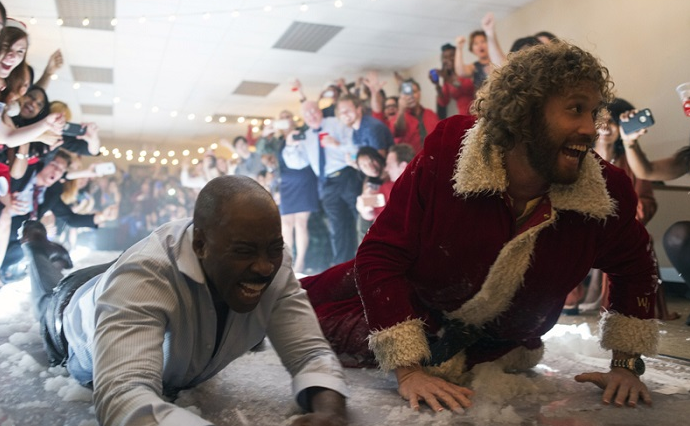 This particular office is run not by an insufferable boor, but rather, a trust fund baby (T.J. Miller) trying to keep the Chicago branch of his father’s tech company, which he inherited, from going under. Eager to sink that ship is his sister (Jennifer Aniston), the CEO of the company. Even though it’s Christmas, she’s just closed the Orlando branch, and has the same plans for Chicago unless her hapless brother can land a major account by the end of the quarter (a mere two days from now). She’s also a bit of a Grinch when it comes to Christmas parties, squelching the one they have planned for that afternoon as soon as she hears about it. Banding together with his loyal tech division head (Jason Bateman), his chief tech whiz (Olivia Munn) and an assortment of other standard office types, including the inappropriate party guy (Rob Corddry) and the HR lady in a multi-denominational holiday jumper (Kate McKinnon), Miller’s Clay determines to win over the client (Courtney B. Vance) by inviting him to the most rockin’ Christmas party ever thrown within the staid confines of a workplace.

Let’s make one thing clear: The Christmas party at the Chicago branch of Zenotek looks like an absolute gas. All manner of inhibitions get thrown to the wind, and it being Chicago, there’s plenty of wind available. The cinematic execution of this lurid bacchanal hovers between just crazy enough to seem plausible, and completely off the rails ludicrous. By the time semi-naked drunk people are jousting with flaming Christmas trees and pushing the snack machine out a tenth story window, the thing has crossed over into pure fantasy. No reputable tech company – one competing with Dell and HP for clients – would leave its office space in such a smouldering wreck, trampled on by somewhere between 200 and 10,000 party guests.

The question, then, is whether Office Christmas Party is good because it’s ridiculous or bad because it’s ridiculous. Unfortunately, the answer is that the ways it’s ridiculous feel pretty conventional in an era where sophomoric gross-outs and bro sexual humour run rampant. The indie version of this movie might be able to catch us by surprise, but as it features big stars like Bateman, Munn, Aniston and Miller, it must go for the lowest common denominator. And so we get a shot of poor Jason Bateman guzzling egg nog out of a penis-shaped chute at the bottom of a cherub-shaped ice sculpture. 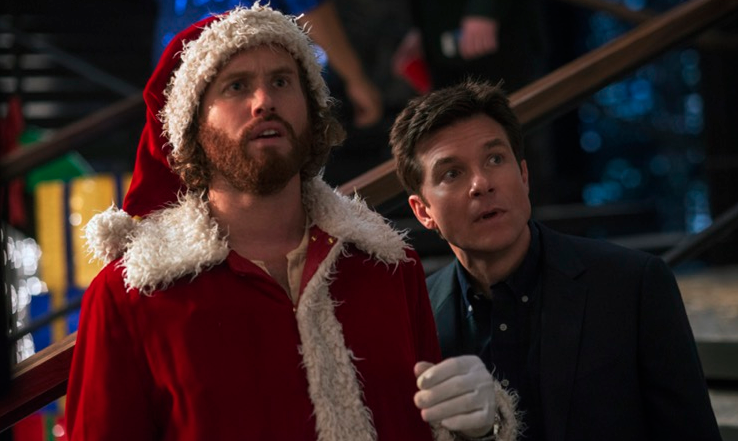 The all-star cast, though, is ultimately the strength that makes the movie watchable. A really likeable group has been assembled here, filled out by bit players with intersecting story arcs in the manner of that overstuffed Christmas stocking called Love Actually. They’re working pretty hard to make the material work, and so it does, sometimes, in spite of itself. And in spite of the fact that actual laughs are in short supply. Laughter is the ultimate subjective reaction, so who’s to say who will laugh at what. But what’s funny about this movie (funny as in peculiar) is that whether it makes you laugh or not does not play a significant role in its effectiveness. The movie is reasonably fun without actually being very funny. Most of the broader jokes just don’t land, which is odd, as they mostly involve things falling and landing in painful ways. The softer humour provokes faint smiles, no more.

And yet something about the zany determination of this movie is just winning enough. When everywhere you look there’s a funny person trying really hard to entertain, you can’t help but feel a bit entertained. Office Christmas Party certainly wanted to be more than just a bit entertaining, but I suppose it’s better than having your Christmas party cancelled by the mean boss lady.