Raw. Grimey. Violent. Park Chan-wook’s Oldboy is not for the squeamish. This fast paced Korean thriller, whilst perhaps not the most intelligent film, will have you glued to your seat, hungry to uncover the mysteries behind protagonist Oh Dae-Su’s vexing predicament.

After being acquitted for drunken behaviour on the night of his daughter’s birthday, Korean businessman Oh Dae-Su (a somewhat debauched individual) is abducted and imprisoned in an apartment-like cell for 15 years. With no knowledge of his captors, and with no reason as to why he is being imprisoned, Oh Dae-Su slowly begins to deteriorate, as he struggles to keep mind and body together. A television and a daily ration of dumplings become Oh Dae-Su’s only sense of grounding as he suffers through this tortuous period of suspended illogical uncertainty. Dae-Su’s inner monologue in conjunction with some truly amazing work from actor Choi Min-Sik, lend a distressing quality to these scenes. Not to mention a disturbing painting that hangs on his cell wall of an ogling, creepy-smiling figure that torments Dae-Su with the caption “laugh and the world laughs with you, weep and you weep alone”. Eventually accepting his situation, Oh Dae-Su begins to train his mind and body by working out and carving a tunnel out of his cell. 15 years pass and with no warning Oh Dae-Su wakes up outside on top of an apartment block with an unquenchable thirst for revenge on his sadistic captor.

This notion of revenge underpins the whole piece and becomes the only real sense of moral worth in an otherwise largely voyeuristic sensory exhibition. Without such an intriguing opening setting up Oh Dae-Su’s quest to find out why this happened to him, it doesn’t feel like there is much else here. There is no denying (as I’ve stated earlier) the great entertainment value, but as it progresses the ever growing presence of ‘so what?’ seems to loom, only becoming more apparent and inescapable. That said, there are scattered moments that definitely appeal to some higher order of thinking but all in all, this is a thriller of gratification. And there’s nothing wrong with that. 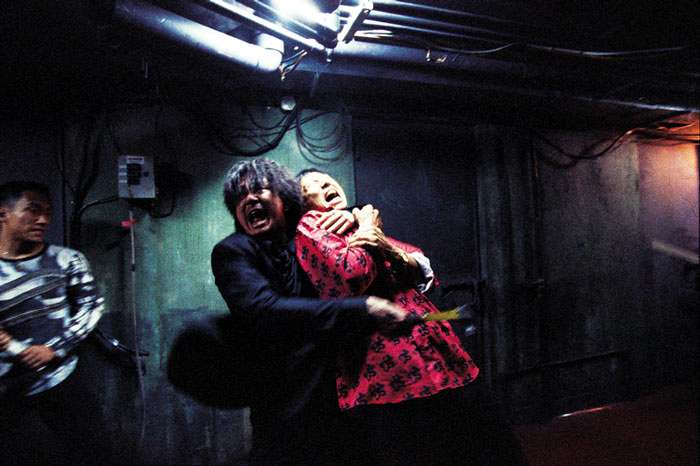 On the night of his release Oh Dae-Su meets a beautiful young sushi chef named Mi-Do and together they set about finding out why this happened to Oh Dae-Su. In time, He comes face to face with his captor Lee Woo-Jin but restrains from killing him until he finds out why he was tormented for 15 years. Woo-Jin gives him an ultimatum: 5 days to find out why he did this to him or else Mi-Do (his new love) will die.

Some great composition places this film within an atmosphere of heroic-nihilism, in particular the way its shot. You can’t help but route for Oh Dae-Su as he works his way to the truth with a clenched fist. You’ll watch some masterfully shot scenes of Dae-Su employing some truly coldblooded brawler skills learnt during his time in captivity and you can’t deny that in these scenes he’s cast like the ultimate anti-hero, and you’ll love him. But at the same time this sense of futility, that things are out of Dae-Su’s hands no matter what he does, and an ending that is so messed up for Dae-Su, establishes an air of nothingness. A sense of ‘the damage has already been done’ pointlessness that no matter what level of revenge Dae-Su gets, it will never be the same again, hangs heavy. And I think this generally reflects the film as a whole; Great entertainment, but a bit of ‘what’s the point?’.

This is a good film. It’s definitely one for psychological thriller lovers and for those with an appetite for sadism, violence and voyeurism. If you’re looking for an intellectual, moving and emotional film then move right along. However, if you’re open for some downright heavy entertainment that will really give you a good knock then hop off here.