Marty (Colin Farrell) is a screenwriter, who is struggling to write his new screenplay, entitled Seven Psychopaths (one of the films many self-referential moments). His girlfriend Kaya (Abbie Cornish) is getting fed up with his lack of motivation. The peace and quiet that Marty craves however, is not forthcoming, especially when he gets dragged into the escapades of Billy (Sam Rockwell) and Hans (Christopher Walken) – a pair of dog thieves who accidentally steal the Shih Tzu of mafia boss Charlie (Woody Harrelson), who will stop at nothing to make sure his ‘baby’ is safe. 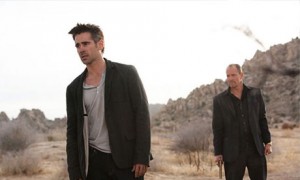 I went into this film not knowing much more than what I just laid out for you, and having only seen the trailer. After a long cinema going drought, this film was just the thing I needed to see. Cleverly written, sharp, and witty, the story moves forward at a snappy pace for the most part, and went in directions I did not expect it to take. This is a comedy all right, but it’s a dark comedy, and there were moments of surprising sensitivity.

A lot of the strength of this film comes from the brilliant cast of characters – the ‘seven psychopaths’. Tom Waits has a great guest role as Zachariah, a serial killer who kills serial killers with a strangely touching back-story. Harrelson as the not quite well adjusted mob boss manages to be funny, but still carries an air of danger about him. You do not want to get on his bad side. Farrell is perfectly cast as well, but for me, the standouts are a tie, between Sam Rockwell and Christopher Walken.

Rockwell, as the out of work actor/dog-napper, is completely crazy (in the best way possible), and his well-meaning, but very misguided attempts to help Marty write his screenplay drive the film forward. He’s violent and unpredictable. Walken’s Hans, by contrast, is practically a pacifist, and is the relatively rational psychopath of the film. I mentioned earlier that the film was full of moments of surprising sensitivity – Walken’s character, and particular Hans’ relationship with his wife Myra (Linda Bright Clay) provided these lovely, quiet, but very touching moments.

Having finished gushing, I don’t want to give the impression that all the characters were perfect. Cornish’s Kaya didn’t really add much to the film, apart from being a narrative device, and Olga Kurylenko’s top billing as Angela surprises me – she’s barely in the film. 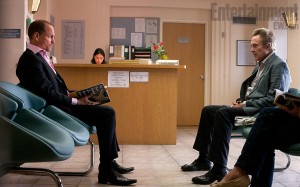 Overall, what really delighted me about Seven Psychopaths, and the thing that will definitely get me to go and see it again, is the crafty way that McDonagh plays with conventions. Marty’s script is as I have mentioned titled Seven Psychopaths, and he writes it as the film moves along. He’s practically basing his story on what’s happening to him in this film – or is it the other way around? Is the story we’re seeing what Marty is writing. There are several little moments in which we’re almost taken out of the story as the characters make these self-conscious comments on Marty’s script/the film (“This film is ending my way!”). There is a brilliant scene during the end credits to remind you of this.

If you like your comedy, crime-capers intelligent, funny, with well-developed and engaging lead characters, you really can’t go past this. McDonagh has put together a brilliant dark comedy, with a depth to it that is far too lacking in films these days.