“This is something you do for a billion years, or not at all” – Peggy Dodd, The Master

I once went to a religious themed party dressed in Reebok runners, a hawaiian shirt, fake handlebar moustache, mullet wig and those sunglasses that people who ride bikes wear. When asked what I was meant to be I replied ‘L. Ron Hubbard.’ At the time I couldn’t have told you what L. Ron Hubbard really looked like, but I was pretty sure it wasn’t Lance Armstrong and Tom Selleck’s love-child. At the end of the day I was just too lazy to find something that actually had something to do with religion and had put on the silliest, nearest things I could find. So it surprised me when quite a few people nodded in recognition and said something along the lines of ‘yeah, of course.’ The man and his organisation are regarded with an equal mix of mystery and ignorance. This may attract a lot of people to Paul Thomas Anderson’s new film, though many expecting a sly look at L. Ron Hubbard’s life may leave The Master disappointed.

The Master is Anderson’s first film since the incredibly popular There Will Be Blood (2007). It’s principle character is also clearly inspired by Ron Hubbard (or is it just Hubbard?) and the inception of his controversial religion Scientology. Anderson has confirmed this but insisted that the similarities end at inspiration. 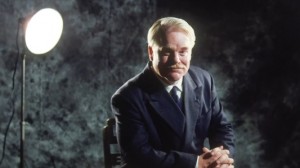 The Hubbard character is Lancaster Dodd, played by Anderson regular Phillip Seymour Hoffman, looking as much like Hubbard as he possibly could. He is the founder and head of a developing faith-based organisation called The Cause. After a drunken night aboard his ship, Dodd takes in alcoholic scoundrel Freddie Quell, for reasons never made quite clear other than Dodd’s enjoyment of Quell’s potent moonshine. Much like Phoenix‘s bizarre ‘JP’ in I’m Still Here (2010), Quell is attracted to the more basic of human instincts. Although Dodd remains inexplicably fond of the man, his wife Peggy (Amy Adams) and his extended family begin to mistrust Quell’s presence.

There is a distinct lack of clarity in the characters and plot in The Master, uncharacteristic of such a usually polished filmmaker. Perhaps conscious of any comparisons that may be made to Hubbard and Scientology, Anderson has opted out of making any clear assertions as to his subject matter. Indeed, the film is essentially opinion free save from a fantastic scene in which a non-believer challenges Dodd and receives charismatic nonsense as a response. The film is ambiguous about the Cause’s doctrine, wisely so.  We don’t need to understand the inner workings of the society, but instead why people are attracted to it. How are people really taken in by something the audience clearly recognise as garbage? Anderson answers this to a certain extent but never fully explores the potential of his compelling subject matter. 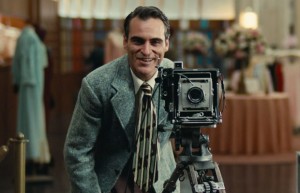 The performances are universally fantastic, it is precision of character that lets them down. What are we meant to take from Pheonix’s drunken, violent Quell, if anything at all? He demeanour is subhuman. He is the beast to Dodd’s master, but we are never sure why the two men stick together. If it is genuine affection, it is never truly felt. There is confusion in the actions of the characters. Dodd seems to have the manipulative talents of a man who could invent a religion and yet shows genuine compassion for the less-fortunate. In another film this might suggest well-rounded characters. Here it raises more questions than answers. Unfortunately, many of these questions will go unanswered. Early implications that the film will explore The Cause’s attraction to the weak is belied by the characters’ actions in the second half.

Perhaps the most interesting character is Dodd’s wife Peggy. She is solid and true to the Cause where others, including her unfaithful husband, are weak. There is a stern resilience to her character and there is the slight suggestion that Peggy may be the real mind behind a lot of Lancaster’s success. Other characters include Jesse Plemons as Dodd’s son, in a small but important role and Laura Dern as a meticulous supporter of The Cause. 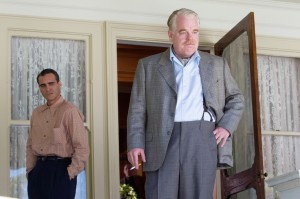 Where the film truly succeeds is in its marvellous aesthetic. I was lucky enough to see the film projected in 70mm and it looks fantastic. Anderson and his production team were heavily inspired by the look  of John Huston’s 1946 documentary Let There Be Light. The Master doesn’t feel like a film about the 1950s, it feels like one made in the 1950s. There Will Be Blood‘s Johnny Greenwood returns to score the film. His work here, perhaps not as flashy as his score for Blood, is nonetheless equally effective, often evoking the wonder of an old Max Steiner score such as The Treasure of the Sierra Madre (1948).

Anderson is a fantastic filmmaker capable of amazing cinema. That The Master is a lesser film of his is praise of his remarkable work to date. It is a good film, fantastic at times and rarely dull. The problem lies in Anderson’s lack of commitment to the subject matter. Regardless of whether Lancaster and The Cause were inspired by Hubbard and Scientology, the area under discussion is too fascinating not to offer an opinion. The characters and plot never become as compelling as they probably deserve to be. There is a lot to admire in Anderson’s film, but don’t look too closely because there is little to grasp on to.