I once read that Andrew Dominik can’t understand filmmakers like Ridley Scott (his example, not mine) who feel compelled to constantly create. Considering his growing reputation as one of Hollywoods finest filmmakers, it’s still a surprise to visit Dominik’s Imdb page to see only three directorial credits under his belt. But there is something refreshing about Dominik’s reluctance to rush. Since he burst out onto the scene with the intense Australian crime flick Chopper in 2000, Dominik has taken his time. But godamn it, he’s used his time well.

Though perhaps understandable, it was a shame to see his second film The Assassination of Jesse James by the Coward Robert Ford  (2007) underachieve at the box office. It is one of the finest films to come out of Hollywood in the past decade. I guess star Brad Pitt didn’t feel that working on the film was a waste of time. He reportedly agreed to work with Dominik again on the recently released Killing Them Softly via text message in less than half an hour.

The film, based on George V. Higgins’ 1974 pulp fiction novel Cogan’s Trade, follows Jackie Cogan (Pitt), an enforcer for the mob who arrives in a nameless town to investigate the robbery of an illegal high-stakes card game. There is little more to the plot than that but plot is never paramount in Killing Them Softly (an unfortunate name, it was originally going to be released under Higgins’ original title). 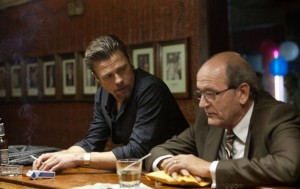 The film is about the characters, all incredibly realised by a fantastic collection of actors including Richard Jenkins, Scoot McNairy, James Gandolfini, Ray Liotta and Ben Mendelsohn. Since Chopper, Dominik has displayed an interest in loquacious ruffians and Killing Them Softly continues the trend. But the characters that inhabit the film are a world apart from the talkative gangsters that have been dominating our screens since Reservoir Dogs (1992). Cogan and his associates are more comfortable waxing lyrical about their social environment – perhaps not something you would witness most criminals doing but certainly in keeping with the hard boiled style of Higgins’ writing.

Dominating the focus is Pitt, again proving he is a far better actor when he pushes himself. ReelGood aficionados may note that another recently published article suggested he is a character actor born in the body of a leading man and I am inclined to agree (with myself). If for every Troy (2004) and Ocean’s 11 (2001), Pitt creates characters like Chad in Burn After Reading (2008) and Richard Jones in Babel (2006) then perhaps the crap to good ratio might work out ok. 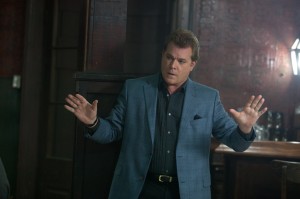 The other true star of the film is Dominik, without doubt one of the most exciting directors working in Hollywood. He is a filmmaker totally in command of his own style. This may not sound impressive but it is quite remarkable how few mainstream filmmakers feel comfortable pushing their own sensibilities into a studio film. Dominik has no such problem, lending Killing Them Softly his own distinct and exciting style. He manages to acknowledge the rich history of the gangster film without completely subscribing to it.

It is worth noting that Dominik has updated Higgins’ original novel to the setting of the 2008 financial crisis, maybe both the films’ greatest attribute and greatest flaw. The change of setting lends the gambling plot a bit more purpose but Dominik stresses the idea perhaps a bit persistently.

But there is so much to admire in Killing Them Softly that any detractors seem like a side note. Directors with such a strong track record are few and far between and it’s fantastic to see an Australian filmmaker continually create such quality. It may be a while until we see his next film, but when the outcome is this good it is most certainly worth the wait.