"Soul certainly leans more toward the adult-oriented pleasures of films like Ratatouille and Wall-E than it does toward the kiddie pleasures of another Cars or Monsters Inc. sequel."

"And whether the sparks of human life are anything like this, or just a bunch of subatomic chemical reactions, it’s lovely to dream yourself away into it."

When Disney lost the theatrical release of its 2020 tentpole Mulan to the pandemic, it scrambled to recoup losses by premiering the movie on Disney+ – but for a $30 rental price, even for the streaming service’s current subscribers. Less than three months after Mulan’s 27 March expected theatrical release, Pixar’s latest, Soul, had also been scheduled to debut. Instead of charging an arm and a leg to rent this one, Disney released it for free to subscribers on Christmas Day. 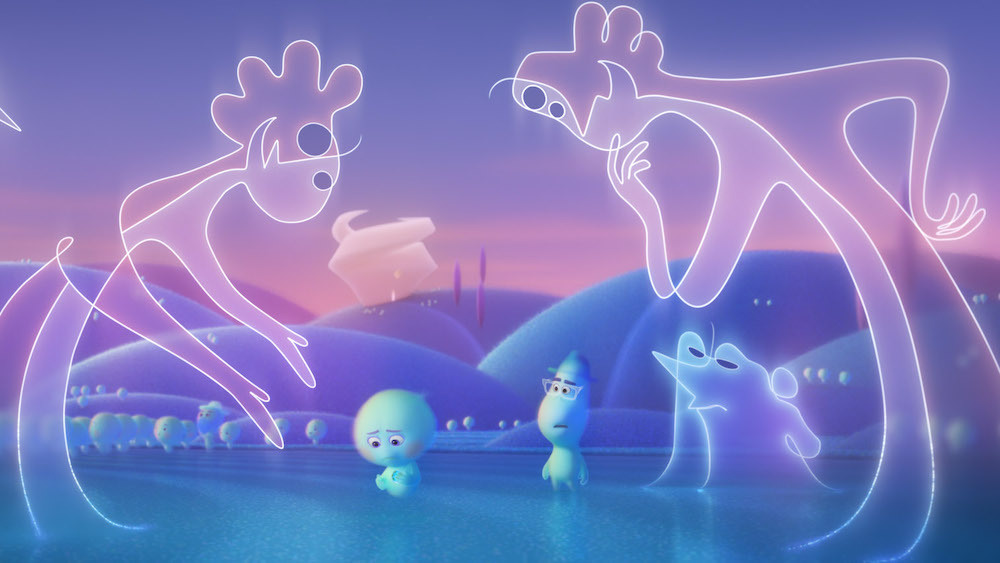 The change in strategy may have been learning the new pandemic landscape, or it may just have been a gross miscalculation of the respective quality of the two films. Though we’re certainly glad we didn’t have to pay $30 to watch the latest absolute gem from Pixar, it would have been worth $60 when measured against yet another perfunctory live-action remake of the studio’s animated IP.

Among Pixar films, Soul certainly leans more toward the adult-oriented pleasures of films like Ratatouille and Wall-E than it does toward the kiddie pleasures of another Cars or Monsters Inc. sequel. And that’s definitely a good thing. Though if you do have kids, never fear, as there’s also a talking cat, and a lot of cute anthropomorphised nascent souls, who look a bit like Casper the friendly ghost’s baby brothers and sisters. At its core, though, it’s about a jazz pianist trying to find his spark in life, before his life is snatched away from him.

Joe Gardner (voice of Jamie Foxx) has been toiling away in anonymity, a man with an undeniable talent who is always THIS CLOSE to winning a meaningful gig. In the meantime, he’s presiding over an out-of-tune high school jazz band. But a former student (Questlove), who always loved Mr. Gardner’s class, has presented Joe with his most promising match yet: an open piano slot playing for saxophone great Dorothea Williams (Angela Bassett). Joe nails the audition, and in his joy at being given a tryout, falls into an open manhole while gabbing excitedly to a friend on his mobile.

Joe’s existence suddenly undergoes a major change. He awakens as a white ball of light with Joe’s trademark glasses and fedora, on a sort of escalator ascending into a far greater white light. It becomes clear Joe’s soul has separated from his body, an event that usually presages the soul’s passage into the great beyond. But Joe refuses to die on the day he gets his big break, reversing direction down the escalator, elbowing past other souls on their way to their maker. He stumbles off the side and into a new sort of in-between world.

This is where souls are “born” and nourished before making the big skydive down to earth and entering a newborn body. Joe isn’t supposed to be here, but the giant Picasso-like creatures that run the place – all named Jerry – at first do not suspect that there’s anything amiss. See, they also have mentor roles here, usually famous types like Abraham Lincoln and Sigmund Freud, who are designed to introduce the souls to the earthly passions that will eventually animate their corporeal form. Mistaken for a mentor, Joe is matched up with soul #22 (Tina Fey), who hasn’t progressed to receive her “earth badge” while rejecting the best efforts of previous mentors over several millennia. It’s a long shot for Joe, but it may be his only shot to return to his body, lying in hospital in a state of limbo.

Soul is such an original creation that it feel strange to compare it to anything in Pixar’s previous catalogue, but those comparisons do make themselves evident. In fact, Soul director Pete Docter was at the helm for the studio’s most recent attempt to dramatise something mystical and ineffable, the 2015 hit Inside Out. Given that Inside Out is top five Pixar overall, it’s no surprise the studio entrusted Docter to translate another bold and ambitious vision involving the inner workings of something we couldn’t know anything about. And whether the sparks of human life are anything like this, or just a bunch of subatomic chemical reactions, it’s lovely to dream yourself away into it. 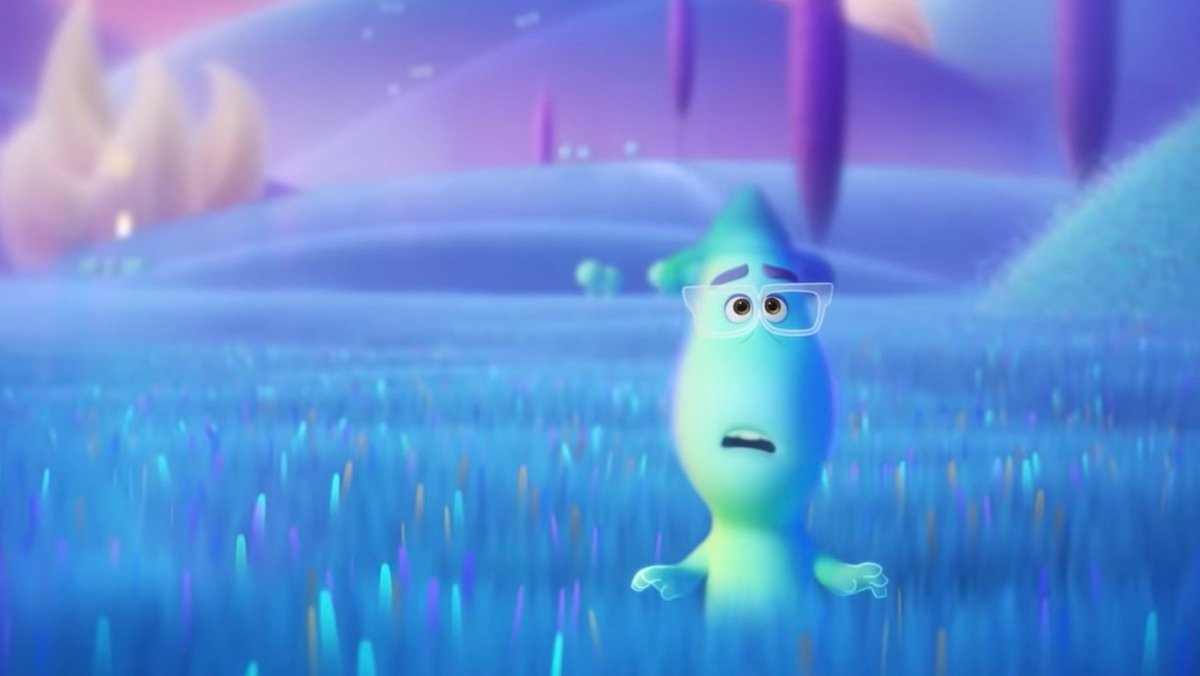 The visions of before-life and after-life in Soul are simply breathtaking, relying as they do on puffy clouds and fields of blue. The visual schemes are not distinctly different from how other artists have envisioned heaven, but Pixar has a just-so means of presentation that gives them a flair of the original. While the baby souls attend classes and make their way into a taxonomy of personality like so many schools of fish in Finding Nemo, there’s room to build out this world with other landscapes of the soul. These include “the zone,” a place where living souls go when they are in a fugue state of artistic or athletic achievement, and even the dark rolling hills where lost souls, who have gotten consumed by obsession, appear as black blobs with undulating tentacles.

Soul splits time between this environment and earth, where Joe is not yet done. Joe and 22 are our two travellers on this journey, kind of like Joy and Sadness trying to make it back to the control centre of Riley’s brain, and Foxx and Fey make them a real treat to follow. (Fey is even real-life besties with the voice of Inside Out’s Joy, Amy Poehler.) The two have good comic chemistry as they build a bond and help teach each other about what it means to find and pursue life’s passions. Because this is Pixar, you’ll need that box of tissues nearby as well. 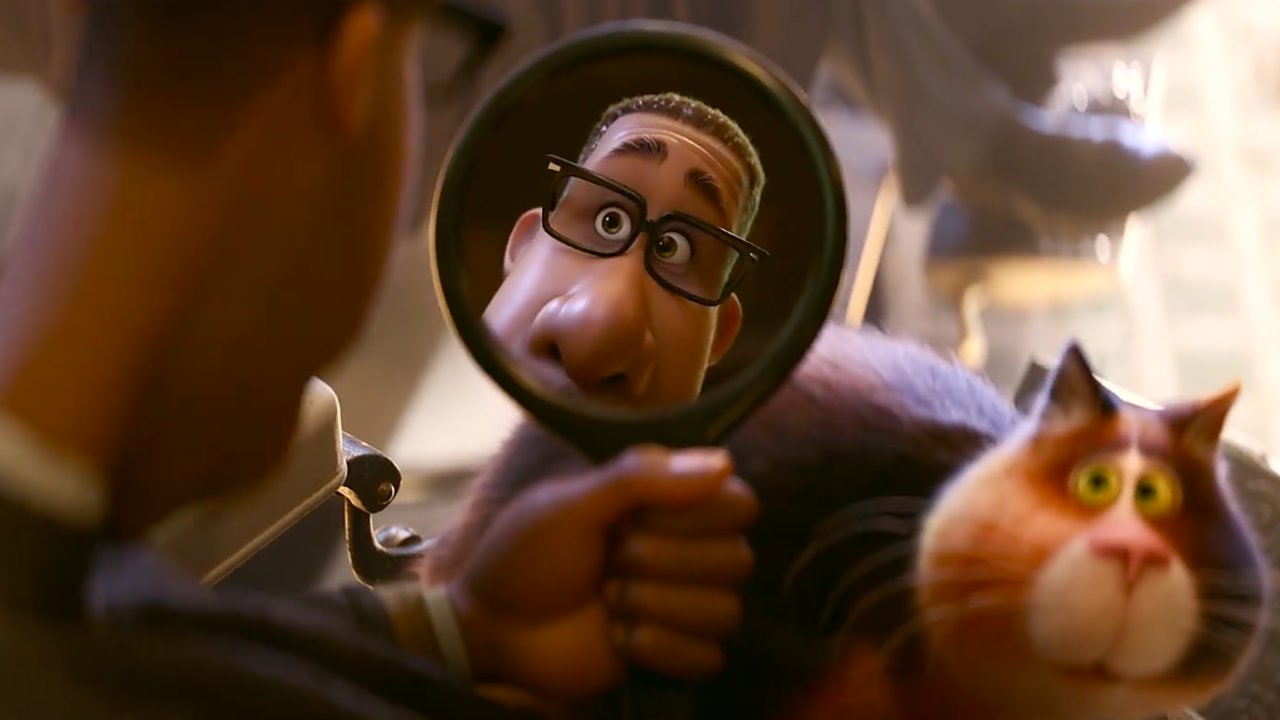 New Zealand’s own Rachel House excels as the film’s antagonist, a numbers cruncher among the Picasso-like creatures, who notices that one soul failed to ascend the stairway to heaven, and is on Joe’s tail from the start. Her distinctly Kiwi line deliveries bring something to this film that Pixar films haven’t ever had.

Of course, what this film is most notable for introducing is an African-American lead character. That’s also a first for Pixar, and the studio could not have done it more gracefully. Great vocal work from Phylicia Rashad (as Joe’s mother) and Donnell Rawlings (as Joe’s barber) complement the work already being done by Foxx, Bassett and Questlove, making this a film with almost exclusively Black human characters rather than just a token Black lead.

It’s easy to see this film sparking the same type of passion for jazz that Ratatouille may have sparked for cooking, or that Damien Chazelle has been trying to spark with Whiplash and La La Land. Jon Batiste, the bandleader for talk show host Stephen Colbert, has composed Joe’s jazz numbers, while Nine Inch Nails frontman and musical score impresario Trent Reznor – counterintuitively but incredibly effectively – has provided an electronic score that mostly accompanies the scenes set in purely existential environments. (Credit where credit is due: He is accompanied by trusty sidekick Atticus Ross.) 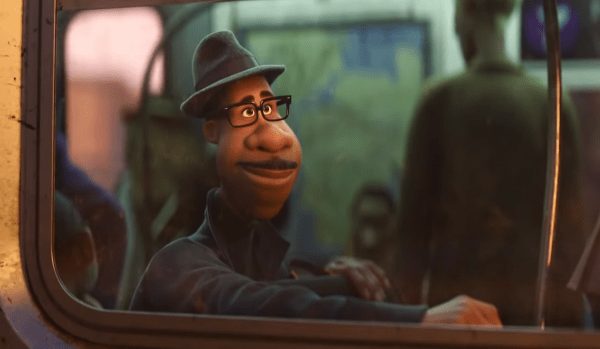 If Soul doesn’t join Inside Out as top five Pixar, it only barely misses out on that honour. Then again, there’s a lot of competition. Just this past year Pixar also released the superlative Onward, which itself would be most studios’ best movie, but may have trouble cracking Pixar’s top ten. It’s lovely to see that the studio has bounced back from a sequel-heavy period to release two emotionally satisfying and defiantly original movies in the same calendar year, neither of which were based on existing properties. (A departure from the more bottom-line oriented nature of its parent company.) In other words, it’s lovely to see that Pixar hasn’t yet lost its soul.