Over the past few years, since the initial announcement that The Hobbit was in production up until seeing it yesterday, I’ve grown to appreciate Peter Jackson’s decision to enhance and divide J.R.R. Tolkien’s relatively slim novel. Those expecting a faithful adaptation of Bilbo Baggins’ story will be disappointed, since The Hobbit has been completely re-worked to fit into the world of Jackson’s Lord of the Rings trilogy. Although Tolkien’s novel was short, his work involving Middle Earth outside The Hobbit suggests a larger story behind the immediate action. Jackson and his writing partners Fran Walsh and Philippa Boyens have delved into the rich Middle Earth history to augment the story. Purists of the novel may find this jarring, but I did not. Personally, I find the appeal of fantasy is its ability to draw us into complete worlds, and I think the additions to the film was made with that in mind. There is much wrong with the film, but this initial decision is not one of them. 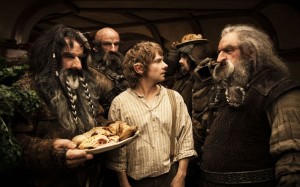 The writing has always been the weakest aspect of Jackson‘s films. There’s no denying that he has a remarkable ability for directing spectacle, but falls short in the more intimate moments. The Hobbit is no exception, if anything it’s just proof that Jackson, Walsh and Boyens shouldn’t be screenwriters. The dialogue is often remarkably bad, particularly in long scenes of exposition and often the character development seems painfully forced. There are also the same weak attempts at slapstick humour that have plagued Jackson’s films in the past. There are few jokes here that anybody over the age of eight will find funny.

Pacing is another problem, something the filmmakers were evidently unable to overcome after splitting one story into three. Faced with an ambiguous structure, much of the narrative is directionless. It may be that the trilogy must be watched as one complete film to be truly appreciated, but unaccompanied An Unexpected Journey strolls along at a peculiar pace. Unfortunately this means that a lot of the memorable passages from Tolkien’s novel never feel as lively and engaging as they really should. There’s also a strong sense that a great deal of time is spent establishing the films that will follow. 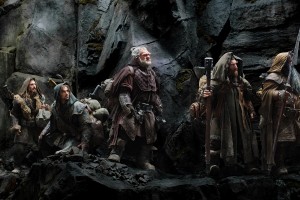 The score by Howard Shore is unremarkable with the exception of the fantastic main new theme, which thankfully blasts anytime the dwarves do anything interesting at all. It’s a shame, but Shore seems largely content to simply recycle much of his Lord of the Rings music. It feels lazy and is too evocative of the earlier trilogy, when fresher music would have been more appropriate.

Jackson also engages with his earlier trilogy, sometimes fantastically, but more often than not any association to those films (including a couple of completely unnecessary cameos) feels like cheap novelty and hinders The Hobbit from becoming a trilogy in its own right.

In regards to the many additions the filmmakers have made, the results are varied. Many of the additions are fantastic in theory but failures in their execution. Much of the blame here lies on the script, which is often appaulingly bad. A scene in which Gandalf, Saruman, Galadrial and Elrond meet to discuss the Dwarves quest should have been fantastic but is burdened by flat, unimaginative dialogue. The inclusion of Radagast the Brown is also poorly realised. With one brief exception, every time the character is onscreen, the film is terrible. Nobody sober wants to see a man covered in bird shit ride a sled pulled by CGI rabbits. 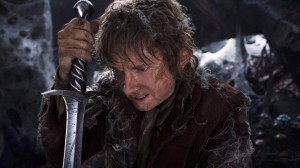 There is still a hell of a lot to enjoy about The Hobbit. I was lucky enough to see the film in 3D 48 frames per second and visually it was perhaps the single most amazing experience I’ve ever had at the cinema. For the uninitiated, The Hobbit is the first feature film to be filmed in 48 fps (or HFR), which is double the 24 fps that has been standard since the late 1920s. It’s impossible to describe the results, although I’m sure the reception will be mixed. The reality is that much of The Unexpected Journey really doesn’t look like a film, so astonishing is the clarity of image. I think a lot of people will be put off by this, but I completely embraced it.

True to Jackson’s strengths as a director, most of the setpieces are absolutely fantastic, particularly viewed in the High Frame Rate. The action may be more slapstick and less believable than in LOTR, but it’s more in line with the fun tone of The Hobbit. There is also just something inherently awesome about seeing thirteen dwarves, a wizard and a hobbit battling orcs and doing magic. I was completely absorbed by the more fantasy-central tone to An Unexpected Journey, after being bombarded by crusty old men in the second two Lord of the Rings films.

An Unexpected Journey is far from perfect, but when it takes off it rarely lets go. Much of this review is negative, which probably does the film a disservice. It’s incredibly fun and visually it’s absolutely mind-blowing. Unfortunately, I doubt Jackson will ever reach the near-perfection he struck with The Fellowhip of the Ring, which is one of the greatest action/adventure films of all time. The Hobbit: An Unexpected Journey is probably more on par with the second two Lord of the Rings films, but I enjoyed it more because at the end of the day, dwarves are awesome.