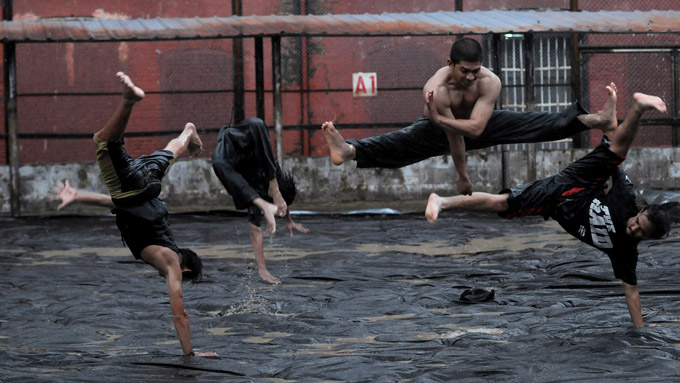 In 2011, Welsh filmmaker Gareth Evans exploded onto the film world’s radar with the balls to the wall action film, The Raid: Redemption. Set almost entirely in an apartment block, Evans showed why he was a force to be reckoned with, introducing the high-octane martial art form, pencak silat, to international cinemagoers. He brought a rare, electrified inventiveness into his claustrophobic apartment block setting, pummelling, punching and exhausting the audience almost to the same extent as the remaining few characters left alive after the film’s ninety-minute assault. Essentially videogame-like in structure, The Raid featured minimal dialogue and even less storyline, as Rama (Iko Uwais) and his S.W.A.T team work their way up to the top of an apartment block to arrest a ruthless mobster, one level at a time.

Three years later, Evans returns with his sequel, The Raid 2: Berandal (again writing, editing and directing). The sequel starts a mere few hours after The Raid concluded, and right from the get go, Evans lives up to, and exceeds, the hype created by the first film, proving he is a genuine talent. This time round, Rama must go undercover and infiltrate one of two rival mob families running Jakarta with his end goal to uncover the rampant police corruption in the city. As he enters deeper and deeper into the shady Jakarta underworld, he finds that motives are never clear, and the oft-repeated line, “There’s no clear war,” begins to make perfect sense.

In The Raid 2, Evans concerns himself with ambition and limitation. These are not only his characters’ concerns, but also the self-reflexive concerns of the filmmaker himself. The interplay between ambition and limitation in Evans’ film is captivating, and he strikes a perfect balance of the two. The Raid 2 could have easily followed the original’s contained setting, letting the film take place entirely within the walls of a prison (as Rama strategically gets arrested and serves a sentence to get close to a mob family’s son). Instead, Evans uses the prison only briefly to choreograph a truly epic fight scene in the muddy prison yard. Reminiscent of an early John Woo, or Sam Peckinpah, Evans’ camera glides effortlessly through the mud, picking up and following bodies in what, under another’s hand, could be absolute mayhem. Instead, Evans gives the bodies a ballet-like orchestration that is both breathtaking and bloody. Likewise, for one of the best car-chase scenes in recent memory (perhaps ever), Evans somehow seamlessly floats a camera between two vehicles, capturing fights taking place within the cars and bringing a fresh energy and inventiveness that permits the audience to both laugh and gasp at the same time, which is a rare feat in itself. 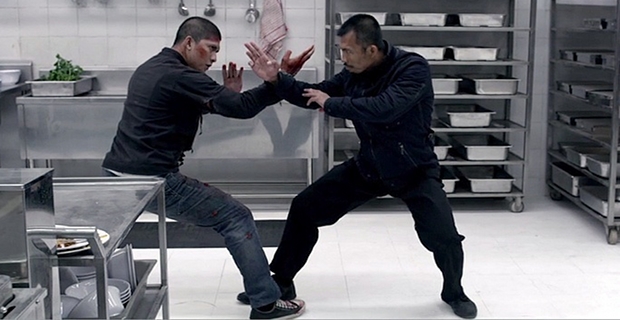 The Raid 2’s characters repeatedly refer to the dirtiness of war, Evans’ fight choreography materialises that notion. Where action cinema in Hollywood more often than not uses quick cross-cuts (think Paul Greengrass, for instance), Evans creates dirty fights, replete with buckets of blood, viscera and grime. If William S. Burroughs was to ever write action movies, these fight scenes would be the manifestation of that Junky genius. While the film is violent, it’s not in the same mould as the torture-porn trend of the last decade. Evans’ camera is dynamic and moves with the bodies taking blows, allowing each brutal punch, kick and blow to permeate from the screen to the audience. This is action cinema, redefined.

The Raid 2 succeeds based on its ambitions. There is so much to love in this intense film, those few small grievances are soon forgotten and the modern brilliance of Evans’ film fully envelops the viewer into the corrupt, bloody underworld of a modern Jakarta. At over two and a half hours running time, The Raid 2 never falls flat, punctuating long scenes of dialogue with bone crunching, kinetically-poetic fight scenes. And within those fight scenes, there are well-timed jaw-dropping moments that make every clash seem fresh and utterly original. In doing so, Evans has created a film of breathtakingly epic proportions that runs completely adrift of the Hollywood CGI-tide. He has fashioned a brutal film without relying on torture-porn. He has crafted a visual balladry of movement using experimental camera techniques that are rarely used in modern films. Hollywood, take note: This is how you make high-octane action cinema.