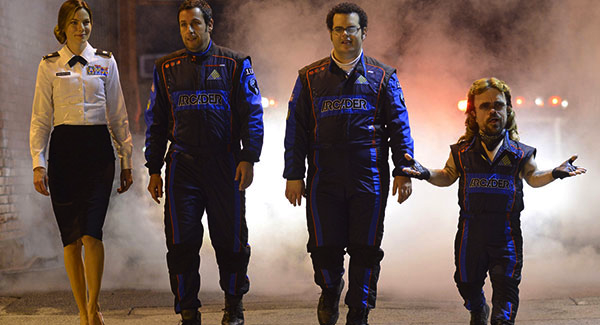 We have no one to blame for Sandler’s continual cinematic output but ourselves. When I say that we have no one to blame but ourselves I mean that I blame all of you, because fuck knows that I haven’t been going to see any of his films over the past decade. Have you ever been watching a trailer, mildly interested in where it’s all going and then Adam Sandler turns up and not only does the interest evaporate but it’s replaced by a mix of anger and dread? Yeah, well that’ll probably happen when you watch this trailer for his new ‘film’, Pixels. Adam Sandler is probably a fantastic fellow in all other regards, but it’s time he took his millions and lived out the rest of his life on a tropical island surrounded by beautiful women and expensive gadgets or whatever. We can’t think of a single good reason that Sandler should ever make another film but a whole heap of very compelling ones why he shouldn’t. Anyhoo –

“In 1982, in the hopes of establishing peaceful communication with extraterrestrial life, NASA launches a time capsule into outer space containing images and footage of Earth life and culture. However, aliens misinterpret enclosed video-feeds of classic arcade games as a declaration of war, specifically Pac-Man, with the Earth being him, and the aliens being the ghosts. They attack the Earth using the games as models for their various assaults, including Pac-Man. President William Cooper (Kevin James) calls upon his best friend since childhood, former 1980s arcader champion Sam Brenner (Adam Sandler), who is now a home theater installer and had a previous relationship with William’s wife (Jane Krakowski). After support from Professor Iwatani (Denis Akiyama) to seduce Pac-Man turns to him pixelating, Brenner decides to lead a team of retrogamers (Peter Dinklage and Josh Gad) to defeat the aliens with various technology similar to those used in games.”