“Do you get dental with that?”

The Hollywood highlights reel from 1997 would quite likely include Titanic, Rainmaker, As Good as it Gets, Men in Black, The Lost World: Jurassic Park, Good Will Hunting, The Sweet Hereafter, L.A Confidential and Boogie Nights. But John Cusack’s film company, New Crime Productions, put forth a sharp, refreshing action-comedy-romance which might not be immediately thought of but it’s a worthy one to add to the list. Grosse Pointe Blank, directed by George Armitage and written by Tom Jankiewicz, Steve Pink, D.V DeVincentis, and Cusack himself, is the story of the assassin who just needed some love.

A world apart from Cusack’s recent endeavours (Frozen Ground, Ice Harvest and 2012, among others) Grosse Pointe Blank was of the same ilk as High Fidelity; fast-talking, funny and just a little more on the crazy side.

Martin Blank (John Cusack) is a paid assassin (is there an unpaid kind?). He’s been in the business since he abruptly disappeared from his high school prom ten years ago, having stood up the love of his life Debi (Minnie Driver), and he’s finding that he’s not feeling it anymore. Offing people just isn’t what it was.

Stuck in what we might call a crisis of conscience, the film opens just as one of his jobs goes awry thanks to the deliciously insane Grocer (the name, not the occupation) – played perfectly by Dan Ackroyd. To redeem himself, Blank is given one more job, conveniently set in Grosse Pointe, Detroit – both his hometown and the setting of his upcoming ten year high school reunion. Of course, being stuck in an existential rut meant he wasn’t that incentivised to revisit the people he’d left behind ten years before. But at the behest of his eminently professional secretary, Marcella (played by the other Cusack, Joan) and his petrified psychiatrist (Alan Arkin) he decides to take the job and attend the reunion. What could possibly go wrong. Oh no! There are bad guys with guns! And they want to kill our sweet Martin! So with Grocer (Ackroyd) wanting to start up an assassins union, a couple of National Security Agency operatives looking to lock him up and some other random dudes with guns after him, Martin’s high school reunion is set to be a memorable one. 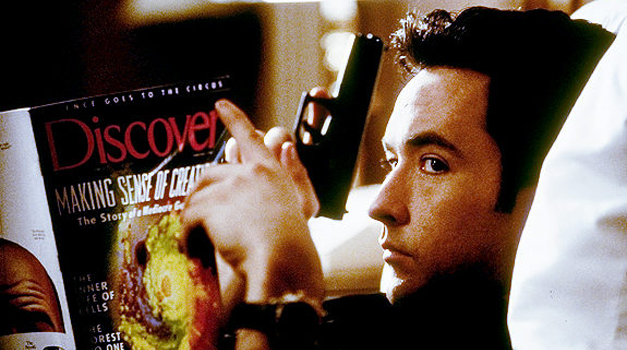 Cusack is at his over-articulate best here; talky, sardonic and with that sympathetic hand-dog expression never far away. Once called “the thinking man’s Matthew Broderick,” Cusack makes Martin likeable and pretty darn adorable for an assassin. Blank is paradoxically amoral and hopeful. As is typical for any Cusack role, he’s a complete fish out of water. He plays off the rest of the cast exceptionally well and this is one of the strengths of the film. Martin’s interplay with Debi (Driver), his long lost, sharp-tongued love, reimagines the romcom formula, his moments with high school friend, Paul Spericki, crackles with the chemistry Cusack shares with real-life best friend, Jeremy Piven, and his scenes with Grocer as they discuss his reluctance to join the unnamed assassin’s union, are hilarious. My personal favourite though, is his slightly (very) imbalanced relationship with his psychiatrist, Dr.Oatman.

Exhibit A: Martin’s indecision as to whether he should attend the reunion has taken him back to Dr.Oatman’s office, much to Oatman’s chagrin. Martin stares into the camera, saying matter-of-factly “I got invited to my ten year high school reunion. I’m conflicted, I mean, I don’t know if I really want to go. It’s in Detroit and obviously I grew up there, I just honestly don’t know what I have in common with those people anymore. Or with anyone really. I mean they all have husbands and wives and children and houses and dogs you know, they’ve all made themselves apart of something and they can talk about what they do and what am I going to say? ‘I killed the president of Paraguay with a fork. How have you been?’ I’m just thinking it’ll be depressing. It’ll be depressing. Aren’t you supposed to be taking notes or something?” And that’s when we see Oatman, head resting on his hand, staring at his desk determinedly and definitely not taking notes. 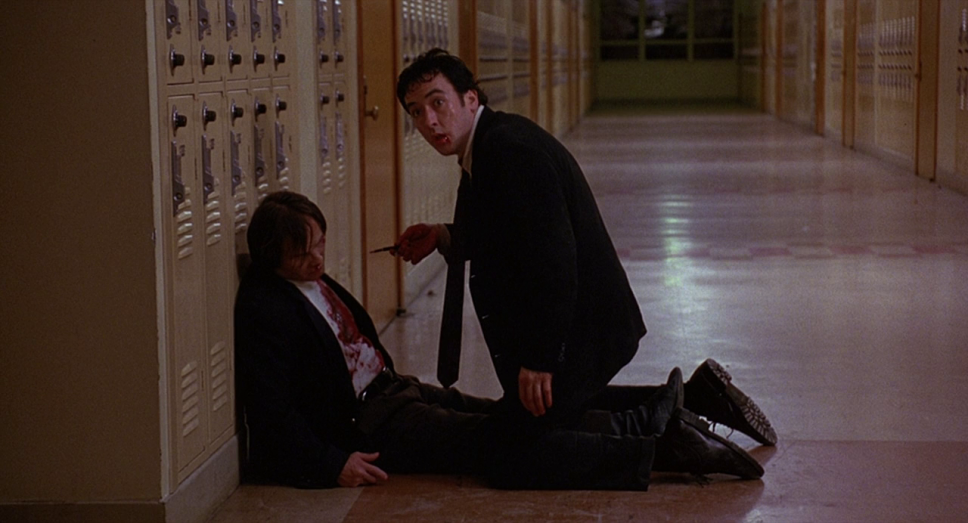 He looks up and replies, “I’m not taking notes, Martin, because I’m not your doctor.”

“Martin, I’m emotionally involved with you.”

“How are you emotionally involved with me?”

Throughout the entire scene, Oatman looks like he’s having the calmest nervous breakdown in history. “Don’t kill anybody for a few days,” Oatman advises at the scene’s conclusion, “see what it feels like.”

“Okay, I’ll give it a shot,” Martin replies.

“No don’t give it a shot,” Oatman snaps back, “Don’t shoot anybody!”

Gems like these are aplenty, like when Martin gets in the car with Paul and his best-friend drives him past Debi’s house, where they stop. “Debi’s house.” Martin says. “Yeah,” Paul replies, “kinda crept up on you, didn’t it.”

The screenplay is chock full of tennis-like back-and-forth type exchanges and it was a joint effort from friends Jankiewicz, Pink, DeVincentis, and Cusack. Grosse Pointe Blank manages to dip in and out of genres like it has a personality disorder but its the mix of action, romance, comedy and 80s nostalgia is a lot of what makes it so engaging. At one point, as Martin is getting ready to pick up Debi and head to the reunion, he’s resorted to giving himself a pep-talk in front of the mirror. He goes through a host of possible ‘occupations’ as he introduces himself to… err… himself, some of which include ‘couch insurer,’ ‘pet psychiatrist’ and the leader of a weekend men’s group which, oh yeah, ‘specialises in ritual killings’. Then we get the token introspective moment which seems to be obligatory in every movie scene involving a mirror as Martin stares hard at himself. “Hi, I’m Martin Blank, remember me? I’m not married, I don’t have any kids. I’d blow your head off if someone paid me enough.”

The plot, likewise, is just as unpredictable; moving in no particular direction and containing no especially intricate plot twists which would be typical of straight-up action films. But it has shootouts in convenience stores, explosions, bloody fights and a backdrop consisting of the awkward small-talk and one-upmanship particular to high school reunions (“Should have worn a skirt,” Debi mutters as they enter the reunion. “Should have brought my gun.” “What?” “Should be fun!”) The film reaches its zenith however, after Martin finally pulls out the dossier of his target (by this point you forget he even had a job) and it’s Debi’s father! Will the coincidences never end! This leads to the best sequence in the entire film; a shootout in Debi’s home with all the bad guys coming to the party at once (even NSA agents, played ably by Hank Azaria and K. Todd Freeman) and a marriage proposal just for the hell of it. My recount wouldn’t do it justice!

Tying it all together is a note perfect soundtrack which channels the shoulder-pads, fluoro headbands and curly hair of the 80s and features the likes of The Bangles, The Clash, Guns ‘n Roses, A-Ha and David Bowie.

In short, it’s admittedly a far from perfect film. It loses focus at some points and oscillates between poking fun at itself and taking itself seriously. But it has heart, charm, plenty of action and laughs to secure its place as one of Cusack’s best. It’s definitely worthy of a rewatch.