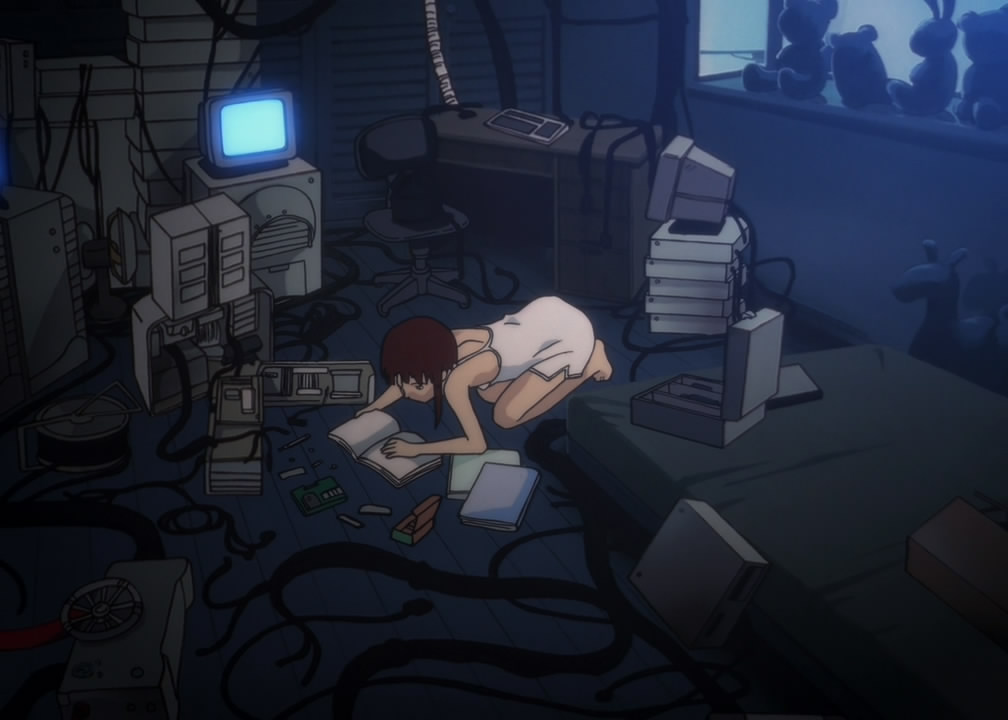 Serial Experiments Lain was something that had always popped up on the fringes of my limited knowledge of anime. Whether I was reading an academic text or an essay, or any anime related article, Lain was hovering just out of sight. Like the Evangelion franchise, or Ghost in the Shell, I knew how much of an impact this show had had on animation culture, not to mention its effect on film and television in general – the cover of the box set proudly proclaims that it ‘paved the way for blockbuster films such as The Matrix’. This I do not doubt. In groundbreaking, mind-bending style, it took what was new and relevant at the time – the Internet – and twisted it in the most memorable and sinister of ways. I was finally about to sit down to Serial Experiments Lain on Blu-Ray, and confirmed for myself what I’m sure most of you already knew – it is a masterpiece of creativity.

Iwakura Lain is a quiet, withdrawn high school student – child like, and in her own little world. After the unexplained suicide of classmate Chisa, everyone in Lain’s class receives an email from the dead girl, which most put down to an insensitive prank. Curious, Lain checks her mail and discovers she too, received the message. Chisa claims that only her body is gone – she lives on in ‘the Wired’. She ominously proclaims ‘God is here’. Lain is soon drawn into the world of the Wired; its mysteries and delights begin to consume her, but things take a dangerous turn when it appears that Lain may be developing some kind of alter ego that soon begins wreaking havoc in the real world, as well as the virtual one.

To me, this felt utterly original. That isn’t to say at all that Lain is an ‘easy’ show to watch. It can (and in all likelihood will) leave you scratching your head, as possibilities and theories swirl around in your mind. It’s easy to see how it could be found frustrating – but rather than frustrating, I found it rewarding. For a series this thematically complex, multiple viewings will undoubtedly reveal hidden layers, depths, and fresh ideas. I couldn’t wait to start it all over again!

The distinction between the ‘real world’ and the virtual world of the Wired is immediately blurred – nearly everything we see and know is through the perspective of Lain, and that view is distorted and unreliable. Every episode ends with questions, and the final resolution is pieced together slowly. The tension and sense of intrigue is fantastic, and the often bizarre story hooks you immediately, and keeps you hooked until the very last second. What is the Wired? Who is Lain? Why are all these strange events connected to her? 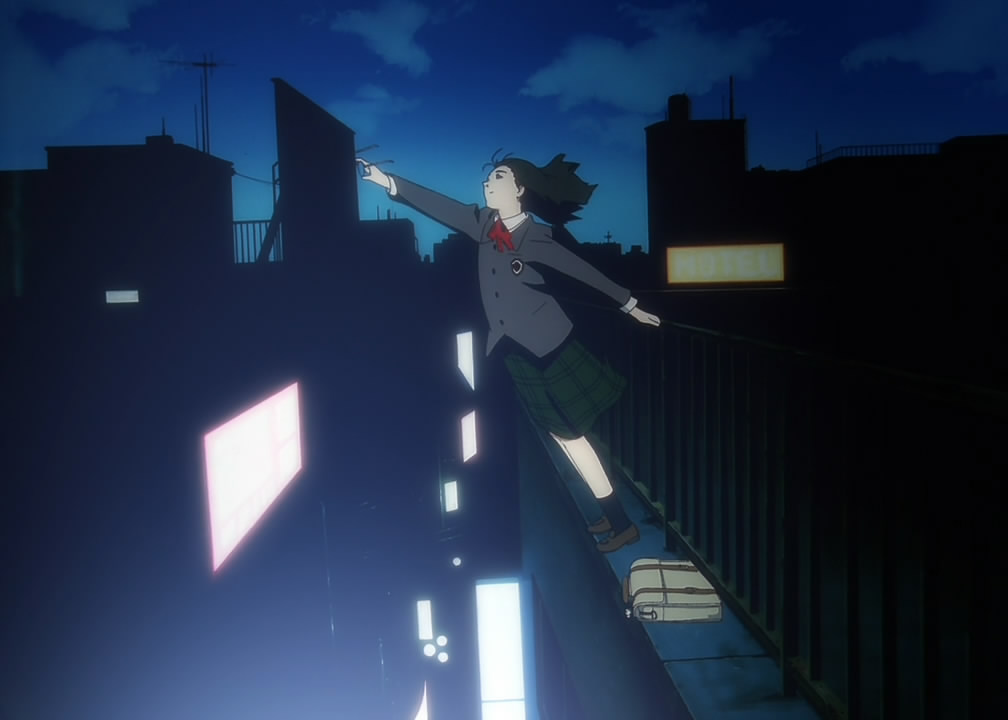 The two main themes of Lain that I identified with most strongly on my first viewing were of very different natures – on the one hand, there is the existential and philosophical question of whether or not a God really exists in the Wired (and elsewhere), and the changing nature of Lain’s identity. Lain is constantly questioning herself, and her self-perception changes almost as much, as do the way others see her. On the other hand, there is the deceptively simple story of a lonely girl seeking friendship. It is Lain’s relationship with Alice, one her classmates, that keeps the show grounded. Alice is one of the few girls at school who tries to bring Lain out of her shell and include her in social life, and she soon becomes Lain’s sole grasp on reality, and the one person Lain would do anything for. At the centre of it all, Lain remains isolated and afraid, and this friendship keeps the show emotionally anchored.

Lain was first broadcast in 1998, at a time when the Internet was still in its infancy compared to what it is now. Watching it for the first time in 2014, it is clear that the show was ahead of its time. Lain’s personal computer, NAVI, is much like Siri on the iPhone. The Knights, an anonymous hacker group, reminded me strikingly of the modern, real life hacker groups of today. Rather than a place for fun and social networking, the Wired is often shown as a dangerous, insidious place, and Lain’s descent and obsession feel terrifyingly real. The Wired was portrayed as a much darker version of what the web could become.  The animation itself adds to the haunting, nightmarish quality – stark light, harsh and white, interplays with dark shadows that are splashed with bright spots of red and blues. There is a persistent, electronic hum pervading nearly all the scenes. Wires, cables, neon signs and video screens stand out and draw the eye, giving the impression that the Wired intrudes into every day life. It is visually magnificent.

Serial Experiments Lain is one of the best television shows I have ever watched. It is a gripping, extraordinary saga, and it should have been a part of my collection a long time ago.