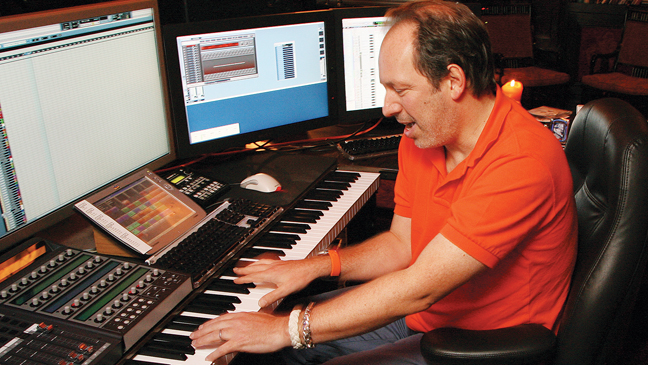 Music is an integral part of film. Some scores stay with us, haunt us, motivate us but ultimately add something to a film that no visual elements can. The Sound Of Movies is a series of articles that highlight the brilliant minds behind the most memorable film scores. This week we explore the epic, ingenious and exceptional film scores by German composer Hans Zimmer.

In the 70s, Hans Florian Zimmer was playing the keyboard and synthesisers for a variety of bands – a notable act being The Buggles. Zimmer can even be seen briefly in their music video for ‘Video Killed The Radio Star’. Since then he has composed for over 100 films and is now the head of the music division at Dreamworks Studios. Beloved by many fans, composers and critics alike – this list highlights some of Zimmer’s greatest work.

Why So Serious? | The Dark Knight

Zimmer is well known for his innovative compositional techniques and his compelling creative process is evident in The Joker’s theme titled ‘Why So Serious?’ The reason this piece stands out from the rest of the score is because of all the experimentation behind it. Used as a musical cue whenever The Joker appears in the film, it’s said that Zimmer tried to use a variety of noises and instruments to create the eerie piece. From the low rumbling, to the high pitched screeching and all the crashes and booms in between, there’s not a second where the piece stops playing with tension, being just as terrifying and unpredictable as The Joker himself.

Under The Stars | The Lion King

Who knew kids films could be so sad? Zimmer sure knew how to tug at the heartstrings with his work on The Lion King. ‘Under The Stars’ plays during the scene where Simba sees his father in the sky. The composition perfectly depicts the emotional journey of grieving and acceptance. As Simba learns to move forward and grow from his past experiences, the music grows with him too. The piece starts off with an air of reflectiveness, with glimmers of hope and optimism until all the pain and sorrow is let go and bright, warming chanting light the way into a better future. And all in under 4 minutes!

Drink Up Me Hearties | Pirates Of The Caribbean: At World’s End

We’ve all probably heard of pirate tunes before, full of drunk old men slurring words together and passing it off as singing with an accordion playing in the background, but the way Zimmer depicted pirates made them seem cool again. With a hint of PotC’s main theme (‘He’s A Pirate’), ‘Drink Up Me Hearties’ is sure to get you and your mates raising your glasses and humming along as if you were a crew of your own.

The story behind The Da Vinci Code is full of religious tweaks that create controversy and ominous undertones, and these seemingly dire themes are also preset in Zimmer’s score for the film. However, the ending does reach more of an auspicious conclusion, as the main character Robert Langdon deciphers the code. ‘Chevaliers de Sangreal’ provides triumphant music for this monumental scene. Complete with Gregorian chanting this track goes nowhere but up, as the dynamics continuously ascends with the instruments getting stronger and vocals going higher. ‘Chevaliers de Sangreal’ creates such an epic atmosphere, that it can make anything from brushing your teeth to driving through traffic seem extraordinary.

A Way Of Life | The Last Samurai

The Last Samurai is meant to be a sort of West meets East ordeal and its clear that Zimmer tries to apply that mentality into the film’s score. Throughout the tranquil sounds of flutes comes through the roaring string section. They never work against each other, instead intertwining and flowing together, moving as one, perfectly depicting the Samurai’s philosophy of self-discipline through music.

Instead of relying on cultural stereotypes like other composers, Zimmer manages to make the entire film’s score unique with its ancient Chinese background. Death is always going to bring up some form of sorrow, but the way Zimmer utilises classical Chinese instruments in ‘Oogway Ascends’ takes away all the negative connotation behind his passing and instead plays out Master Oogway as the honourable and respected character that he is.

A classic Zimmer score. The touching story of little old Miss Daisy is perfectly displayed in Driving. Zimmer’s take on the sweet film that raises awareness on all of the racial prejudice of mid 1900s America, is everything a film score should be. ‘Driving’ is playful, memorable and fits perfectly with the theme and setting of Driving Miss Daisy. It’s hard not to tap along to the beat, and the flute’s solo is just as infectious. What’s more impressive is that the film’s score was composed entirely through samplers and synthesisers.

The complicated conscious and unconscious state of Inception called for its music to be just as elaborate. And while I think ‘Time’ encompassed the depth of the film well, there are and will be people who will say this and Zimmer’s latest pieces are starting to all sound the same. Nevertheless, this piece still deserves to be on the list. Just give it a listen and it won’t take long before you get lost in this score, and in your own consciousness.