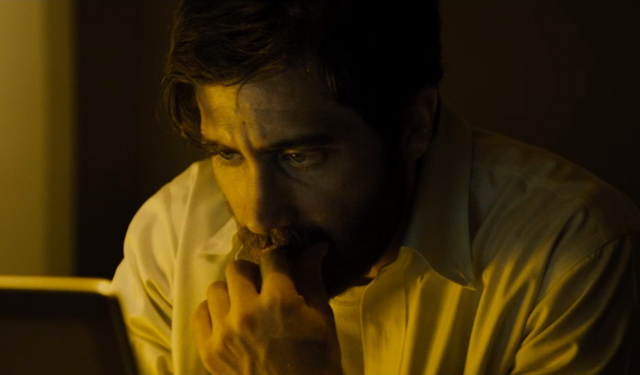 There are twin films, and there is the Enemy/The Double curiosity. Astonishing that two separate films, both dealing with a man who discovers his exact double, should be released within one month of one another. Denis Villeneuve’s Enemy shares a remarkable degree of creative and narrative drive with Richard Ayoade’s The Double. Indeed, Enemy is actually based on a novel entitled “The Double”, albeit José Saramago‘s 2002 novel rather than Fyodor Dostoyevsky’s classic novella (as Ayoade’s film is). The films share a muted visual palette and are both set in vaguely dystopian cities. In both films, one man is meek and bookish, while his doppelgänger is outgoing and confident.

Adam Bell (Jake Gyllenhaal) is a lonely college history professor who rents a movie on a colleague’s recommendation and discovers an extra who looks entirely identical to himself. Becoming enthralled with his doppelgänger’s existence, Adam, after some research on the internet, identifies the actor as Daniel St. Claire, a stage name for Anthony Claire. Adam’s obsession with Anthony grows, visiting the actor’s office and calling him at home. The men eventually meet, amidst mutual bewilderment and fear, and find their lives begin to intertwine and spiral out of their own control.

There’s a real sense of classicism to Enemy, which Villeneuve has clearly fostered deliberately. The entire film is shot and scored like a work from the late silent era – particularly reminiscent of German Expressionism. It’s intentionally eerie, accentuating the fundamental angst of self discovery. Like in Ayoade’s The Double, each man represents what the other is not. Anthony is self-assured and sexual while Adam is submissive and peculiar. Mood is paramount, something that Enemy shares with Villeneuve’s previous film Prisoners. What does it all mean? I’m sure Villeneuve has a vague idea, but it’s perhaps lost in translation in the midst of ambiguous symbolism and gigantic spiders.

I cannot recommend Enemy to anybody who harbours a fear of spiders, as the abominable creatures play a significant part in the film, both physically and thematically. Reportedly, the actors signed a confidentiality agreement that prevents them from discussing the significance of the spiders in the film, but their monstrous presence is certainly an unwelcome addition to anybody like myself – sleep may be a consequential concern for a number of weeks to come.