"One of the most awkward constructions in the original Ant-Man was its relationship to the rest of the Marvel universe. "

"This is the most kid-friendly Marvel movie in ages – especially compared to the violent Infinity War..."

Who knew the second Ant-Man would become the most anticipated movie in the history of the Marvel Cinematic Universe? That’s certainly an overstatement, but there are plenty of reasons people have been eagerly awaiting its release, related both to its status as a solo franchise and its relationship to the bigger picture. That bigger picture is Avengers: Infinity War, the biggest picture so far this year. As this is the first film released in the MCU after that movie’s big cliffhanger, fans are undoubtedly hungering for some, any, information about the status of their heroes. Ant-Man and the Wasp promised to provide that, potentially.

But the Ant-Man sequel also has its own interesting questions to answer, as it’s following up a movie that was the hybrid vision of two directors: Edgar Wright, the Shaun of the Dead auteur who left the project citing creative differences, and Peyton Reed, the “hack” who picked up the pieces and finished the movie. Those who credited Wright’s sensibilities for the things that were good in the first movie might wonder what an Ant-Man movie devoid of those sensibilities looks like.

The answers to those questions are: “sort of” and “really good.” 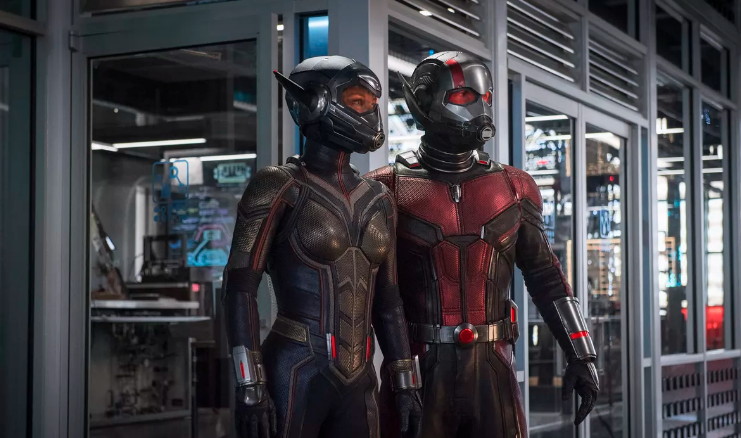 It’d be a spoiler and ruin the movie’s multiple mid-credits sequences to tell you how much Ant-Man and the Wasp comments on the events of Infinity War. Let’s just say it’s a “non-zero amount.” What we can answer is what a delight this movie is as an independent entity, one that grooves to its own different beat. Star Paul Rudd is the only writer credited on both films, but his four collaborators here do something that his three original collaborators could not: They delve deep into the logic and possibilities of a world where the size of objects is infinitely elastic, and they deliver the goods with a tonne of laughs.

Even telling you when this movie occurs could be construed as a spoiler in these spoiler-conscious times, though the movie itself leads with the title card “PRESENT DAY,” so that seems safe to say. Scott Lang (Rudd), the erstwhile Ant-Man, is finishing up two years of house arrest after his little lark at an airport in Germany, as seen in 2016’s Captain America: Civil War. The ankle bracelet that limits him to the perimeter of his San Francisco house explains – or, uh, might explain – his conspicuous absence from Avengers: Infinity War. He’s trying to run his security business with partner Luis (Michael Peña) from his house while waiting for his sentence to run out.

However, he has a weird dream where he sees himself in the mirror and Michelle Pfeiffer looks back. Pfeiffer plays Janet van Dyne, wife of Hank Pym (Michael Douglas), who created the tech behind the Ant-Man suit and once donned it himself. Scott also has a love-hate relationship with their daughter, Hope (Evangeline Lilly). Janet was lost in the quantum realm when Hope was just a child, the consequence of shrinking herself to atomic size to disable a cruise missile that was set to take out a large chunk of the population. When Scott himself returned from the quantum realm, something Hank hadn’t thought possible, it now appears he could have genetically intermingled with Janet, encouraging the possibility that she’s still alive down there.

Hope has now become the Wasp, a hero with similar size-changing abilities, only with wings. (Ant-Man, you may remember, has to travel on a flying ant.) Not only does she want her mum back, but she’s trying to keep Hank’s tech out of the hands of several other baddies who want it. Meanwhile, Scott just wants to avoid being caught outside his house by the zealous local FBI agent who functions as his parole officer (Randall Park), though that doesn’t look like it’s going to happen for long. 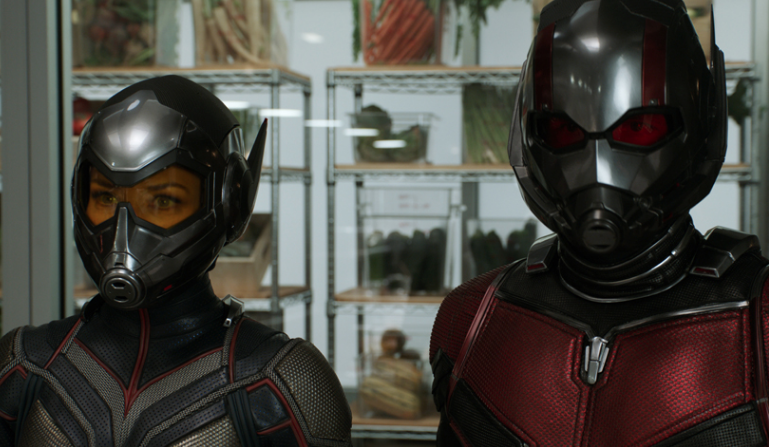 One of the most awkward constructions in the original Ant-Man was its relationship to the rest of the Marvel universe. Only three years ago, Marvel had yet to really mess around with crossing over characters between its franchises, leaving Ant-Man as one of the first examples of that initiative. Simply put, it wasn’t smooth. Ant-Man the movie and Ant-Man the character felt stymied in their attempts to exist as their own franchise before they became beholden to something else.

Ant-Man and the Wasp, then, is a very interesting course correction in that regard. Again skirting the issue of how directly the other Avengers are involved, we can say that much of what works about this movie – and a whole lot of it works – is how it feels like it has only its own rules to obey. And those rules largely have to do with how fun it is to see big things get small and small things get big. 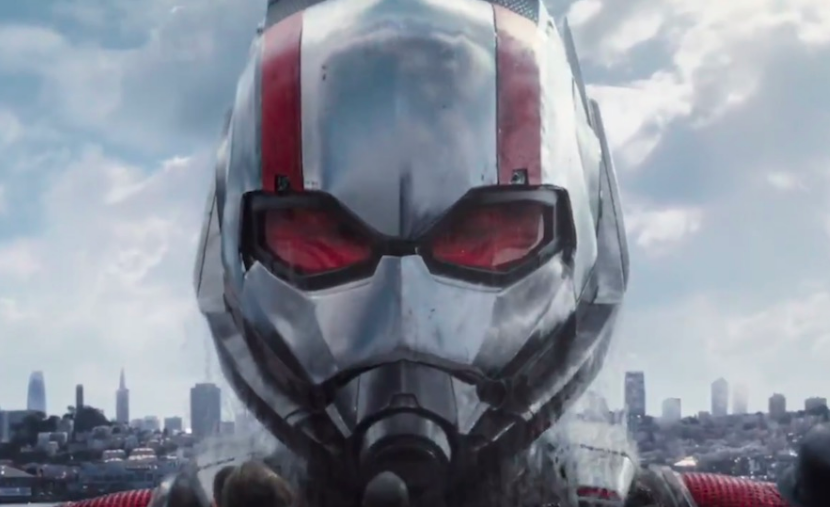 When else have you seen a movie where a whole building was the MacGuffin? Indeed, that gives you some idea of the imagination on display here, imagination that feels gloriously unshackled. The bad guys want to get their hands on Hank’s lab, his entire lab, and they can, because Hank has a habit of shrinking it down to the size of a suitcase and wheeling it around with an extendable handle. That a miniature building is being passed around like a hot potato is not only delightful in its own regard, but gives some idea how little this film takes itself seriously. And as the Marvel movies start to become more serious, this film feels like a light lemon sorbet between heavier courses.

But it’s not just the big getting small. A human-sized Pez dispenser is used as a piece of debris intended to knock a pursuing minion off his motorcycle, and the absurdity of it is a joy. In fact, the chase in which that occurs is the film’s action centrepiece, as it also showcases the best bits of cars changing their size according to the particular needs of the moment. 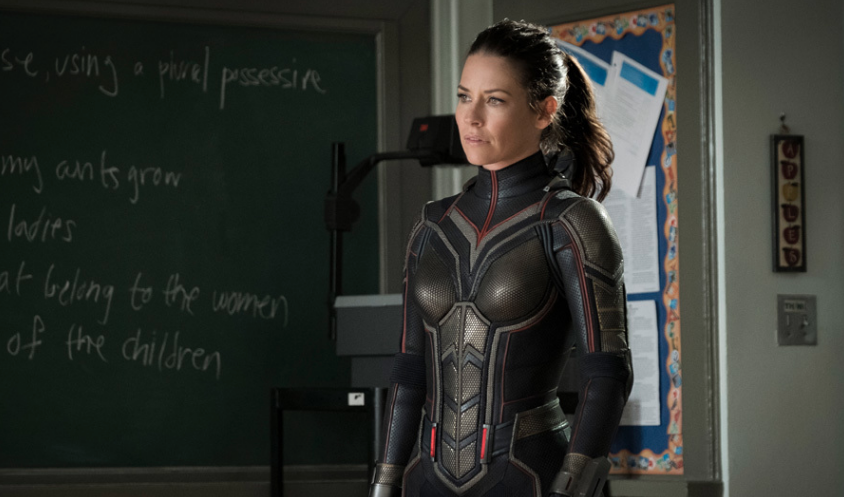 You have to suspend a little disbelief at how good Hope is with that regulator, to bounce back and forth between sizes in order to kick villain butt at full size, and elude bullets when microscopic. But you’re watching a movie in which things can shrink and expand with the push of a button. If you’re not already suspending disbelief you’re doing something wrong.

The cast sells this baby big time, and in addition to extremely charming turns by the likes of Rudd, Lilly, Douglas and Pena, you’ve also got welcome new additions to the cast played by Laurence Fishburne, Walton Goggins and Hannah John-Kamen. Although some of these are heroes, some of these are villains, and some are somewhere in between, they abide by a consistent tone Reed brings to the project, which makes everything light and breezy. This is the most kid-friendly Marvel movie in ages – especially compared to the violent Infinity War – and it feels like Reed has given us that without having to compromise a thing. It’s a truly impressive feat for a man who was never supposed to be involved with the Ant-Man franchise, but has made it his own.