"Ludicrous has never been a place the Saw series has been afraid to go. "

"One problem carrying over from previous films is the inability to stage Jigsaw’s deathtraps with tension, urgency, or underlying terror."

Saw movies were released like clockwork every year from 2004 to 2010, making them the 21st century answer to the likes of Friday the 13th and Nightmare on Elm Street. After that same period of time without one, the franchise predictably reveals it was only hibernating with the release of Jigsaw, the eighth film in the series. Since sequels don’t use numerals these days, they were never going to call it Saw 8. But naming the movie after the central character (see: Jason Bourne, Rocky Balboa) teases that this is some kind of back-to-basics reboot, either a prequel or an essential re-imaging of the core Saw ethos. That it’s really just more of the same is dispiriting, if not surprising.

It mightn’t have been more of the same, with two promising Aussie horror directors at the helm. The films of Peter and Michael Spierig have shown a distinct perspective and engendered passionate followers, from Undead to Daybreakers to Predestination. Their single-word title streak continues here, but this is their first film that doesn’t feel like a clear step forward in their evolution. The Spierigs likely thought they could inject something fresh into a moribund property. From the finished product, it’s hard to tell what they thought that might be. 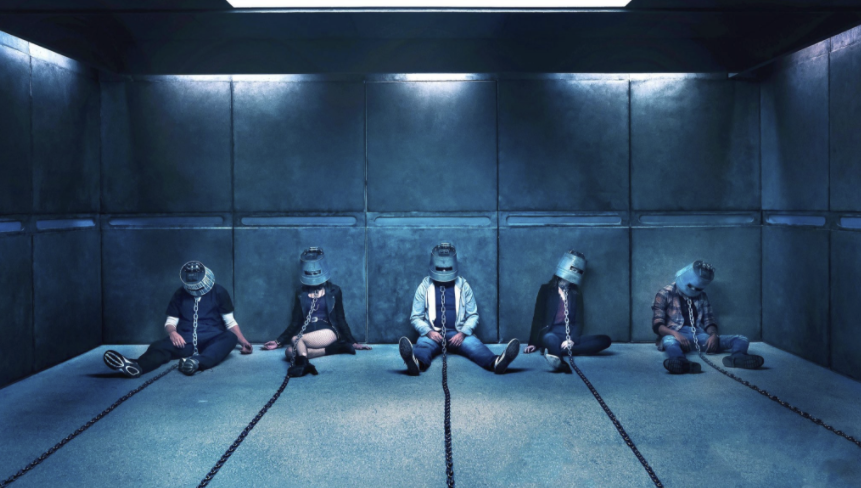 Jigsaw picks up ten years after the death of John Kramer (Tobin Bell), who was dubbed “the Jigsaw Killer” for his signature of cutting flesh out of his victims in the shape of puzzle pieces. Of course, puzzle pieces were hardly his most distinguishing characteristic. Jigsaw was better known for placing his victims, often many at once, in these byzantine traps compromised of chains, clamping metal jaws, knives, table saws – anything he could use to compel them to repent some sin they’d committed, usually at the cost of body parts or their sense of humanity toward the others playing “the game.” You might call Jigsaw the grandfather of torture porn.

Since there were four (now five) Saw movies after Kramer died, Jigsaw’s is a world of copycats. The latest now appears to be upon us, as a new game begins that has all the hallmarks of one of Kramer’s classic endeavours. However, there’s something different this time. Kramer’s actual blood has been found under the fingernails of one of the victims, and new voice recordings have surfaced that match Kramer’s exactly. As five new victims try to prevent themselves from getting ground into mince, a series of detectives and forensic medical professionals work to determine if Jigsaw has a new copycat: himself.

Ludicrous has never been a place the Saw series has been afraid to go. That makes it sort of a perfect fit for the Spierigs. Anyone who saw Predestination will know there’s no narrative twist too outlandish for them to present with a straight face. In Predestination, that was (mostly) a good thing, and at times that has been a good thing in the Saw series, as the writers have worked overtime to concoct an ever-more labyrinthine mythology.

As weak as many of the previous Saw movies were, they were never examples of phoning it in. Those movies regularly called back to earlier events in the series, and as Jigsaw’s chain of collaborators and proteges grew larger and less believable, the writers never simply brushed it off with a wave of the hand. A montage of previously unconsidered interconnections was always unveiled, with the use of flashback, in the final five minutes of these films. Hypothetically, it blew our minds. If anyone could, the Spierigs might pick up that thread and run with it. 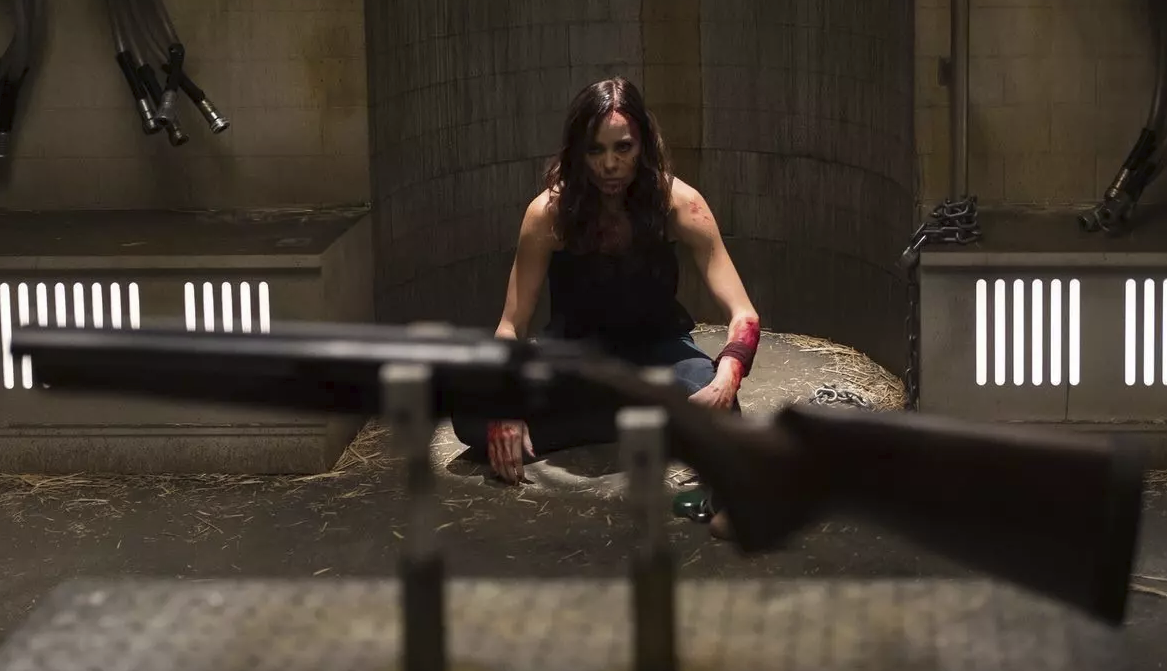 And they have, which is to say that Jigsaw continues that tradition of asking us to expect the unexpected. What the Spierigs haven’t done is contribute any of the visual distinctiveness of their previous movies. This looks, acts, walks and talks like every other Saw movie that’s come before it, which suggests it could have been made by any of the hacks who made any of those movies. The producers wouldn’t likely have selected the Spierigs if they just wanted more of the same, so it may be that the directors have disappointed their bosses as well as their fans.

One problem carrying over from previous films is the inability to stage Jigsaw’s deathtraps with tension, urgency, or underlying terror. What gripped fans originally were a few tightly wound set pieces in which victims had to summon the courage to mutilate themselves in order to avoid the far worse fate of death.  A clock was always ticking and they had to weigh their need to act against their ingenuity in trying to find an alternate means of escape. As these scenarios played out in real time and hit peak intensity very quickly, they carried a certain queasy immediacy. 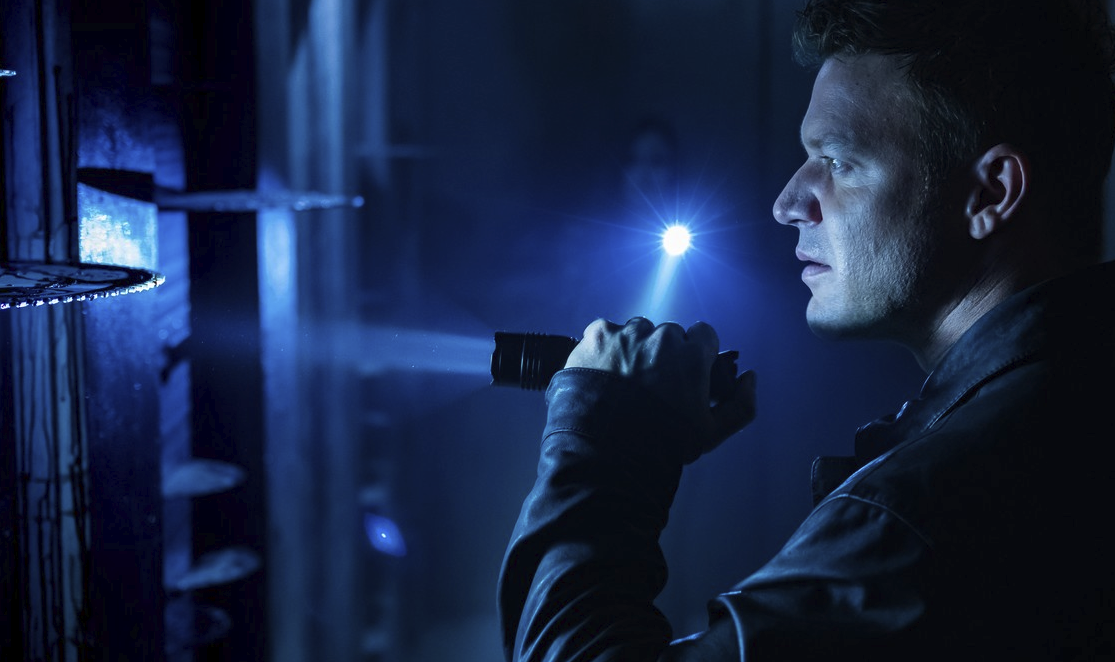 Lately, the Saw series has taken to cutting away from “the game” to follow the procedural elements of the police and others trying to stop the killer before anyone else dies. These scenes are plodding and they involve little intrigue. Worse, they sap the tension out of the torture scenes, which require momentum to be effective. If a man has metal wires wrapped around his legs that are increasingly constricting them, it’s pretty counterintuitive to cut away from that for five minutes at a time. By the time he finally loses that leg (it should be no spoiler that each trap must have its moment of glory), it doesn’t make us squirm, but merely represents the delayed arrival of the inevitable.