"But again, comparisons to Alicia Vikander in Ex Machina will be inevitable, and they will not be favourable to Taylor-Joy."

"...the movie fails to bring its more philosophical implications to the fore."

Scene: A high-tech laboratory nestled in the remote reaches of the forest, where an artificial woman has been brought to life. The extent of her consciousness is not known, nor are the dangers she poses. So she’s kept as a prisoner, isolated in a room behind a glass barrier. An outsider arrives to assess that consciousness and those dangers, unsure what to expect from either her or the secretive environment in which she was created. This outsider will also interface with her creators, to see if they have become too close to her – to it – to impartially detect whether it poses a threat. And none of this will likely turn out well.

Think you saw this last year with Ex Machina? That may be true, but Luke Scott’s Morgan is not Ex Machina 2.0. It’s more like the beta version of Ex Machina in which all the flaws were revealed and had yet to be fixed. That could be said of Scott himself, who is, in a manner of speaking, a version 2.0 of his father, Ridley Scott. But like so many chips off the old block who followed in daddy’s footsteps, the younger Scott is a pale facsimile of his father in terms of craft. It’s only Luke Scott’s debut, so we should not rush to judgement on his long-term viability as a director. But even the elder Scott’s lesser films show better instincts than his son’s first outing. 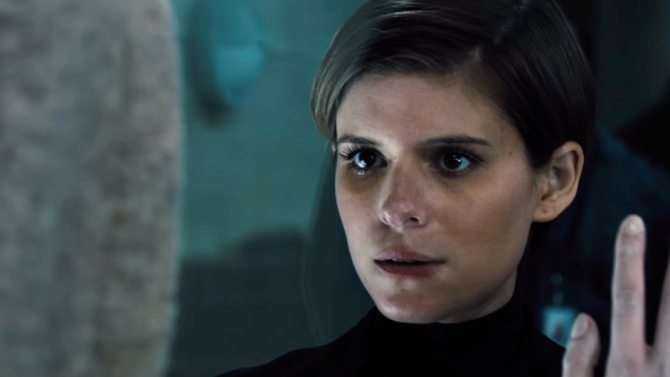 The title character in Morgan, played by Anya Taylor-Joy, is indeed a form of artificial life, though she’s not exactly a robot either. She was engineered in a lab but is a full biological entity – no microchips or mechanical parts to speak of. The circumstances of her creation have caused her to age more rapidly than a regular human, at about a four to one ratio, and also left the metaphorical wiring in her brain working improperly. It’s this second part that has become a problem, as she’s lashed out violently against one of the researchers despite showing no previous violent tendencies … in an ominous reminder of “what happened in Helsinki.” Enter the company’s risk assessor/cleaner, Lee Weaver (Kate Mara), who is under orders to contain any negative exposure for the company and eliminate any obstacles to its interests. She’s also brought in a psychologist (Paul Giamatti) who will make his own analysis of Morgan’s emotional stability. The trouble is, there are indeed obstacles in the form of the local scientific staff, totalling about eight, who have formed emotional attachments to Morgan, and aren’t guaranteed to cooperate should extreme measures be needed. They’ve watched Morgan grow up and seen her capacity for kindness and wonder, leaving their scientific objectivity in short supply.

Morgan is oddly indeterminate about what exactly this artificial woman is. Whatever science the movie bothers to give us is hastily explained, but words like “robot” and “machine” are never used. As such, it’s puzzling and problematic that she is referred to so coldly as an asset or a piece of property, as might be more clear if she had a chrome endoskeleton poking out, a la Ava in Ex Machina. By all appearances, she has more in common with a test tube baby – a human life made possible only by advances in science, but a human life nonetheless. Perhaps due to the restrictions of a far lower budget, Scott is left relying on a discoloration in Morgan’s eyes and a silvery pallor to her skin to indicate her otherness. He does get help from the inscrutable affect of Taylor-Joy, which she put to wondrous effect in The Witch. But again, comparisons to Alicia Vikander in Ex Machina will be inevitable, and they will not be favourable to Taylor-Joy.

Because Morgan seems more like a troubled teenager with poor impulse control than an AI with bad programming, the movie fails to bring its more philosophical implications to the fore. The debate about how we define and treat intelligent life is further damaged by the one-note direction Scott takes the film. We won’t spoil what that direction is, but it makes the film thematically uncomplicated in pursuit of some rather pedestrian genre payoffs. Specifically, it isn’t spoiling too much to say that there are a handful of fight scenes in this movie, and their disjointed editing and execution serves as a microcosm of what’s wrong with the whole movie. The progression of scenes is similarly disjointed in that Morgan’s motivations swing wildly between unlikely, self-defeating, and utterly banal. And since her decisions drive most of the narrative, they drive it right into the ground.

Like many movies of its kind, Morgan has a couple alleged surprises in store, but even a cursory analysis of what Scott is giving us would reveal most of them. One surprise that might have been promising is the idea that Morgan has a seemingly homosexual interest in her most sympathetic handler, played by Game of Thrones’ Rose Leslie in one of the film’s better performances. What better proof of an entity’s humanity than for it to engage in a minority biological preference like attraction to the same gender? Yet the film is too busy barrelling toward its action movie climax to give such interesting wrinkles a complete consideration, or even an incomplete one. Morgan is not a complete waste of time, but it’s not very intelligent, artificially or otherwise.