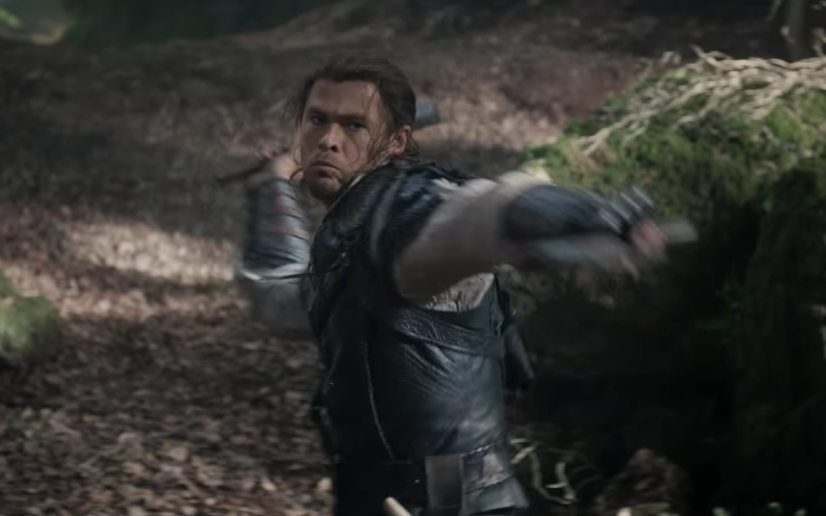 We’re in a world in which Alice Through The Looking Glass and The Huntsman: Winter’s War exist. Is that a world you want to live in? Stop going to see this crap, people, and we might just make it through to the other side. If there ever was a film that we completely forgot was in the pipeline and then were rudely reminded by its trailer, then this is it.

Having said that, there’s no denying that Chris Hemsworth is a manly man we like looking at and hearing and that he was easily the best part about Snow White And The Huntsman (not a difficult feat but a feat nonetheless) and this unnecessary sequel seems to know it. Less Kristen Stewart. More Chris Hemsworth with a Scottish accent. That seems to be the thinking of a person who wasn’t in charge of greenlighting the original. Does that give us hope? No.

“Long before the evil Queen Ravenna was thought vanquished by Snow White’s blade, she watched silently as her sister, Freya, suffered a heartbreaking betrayal and fled their kingdom. With Freya’s ability to freeze any enemy, the young ice queen has spent decades in a remote wintry palace raising a legion of deadly huntsmen – including Eric and warrior Sara – only to find that her prized two defied her one demand: Forever harden your hearts to love.

When Freya learns of her sister’s demise, she summons her remaining soldiers to bring the Magic Mirror home to the only sorceress left who can harness its power. But once she resurrects her sister Ravenna from its golden depths, the wicked sisters threaten this enchanted land with twice the darkest force it’s ever seen. Now, their amassing army shall prove undefeatable…unless the banished huntsmen who broke their queen’s cardinal rule can fight their way back to one another.”