"You Were Never Really Here is two films, neither well-executed, both sitting uncomfortably with the other. "

"The film is aided enormously by the presence of Phoenix, whose eyes in individual scenes express more than most entire performances."

Procrastinating and needing to write my review of Lynne Ramsey’s You Were Never Really Here, I started firing off rapid Google searches relating to the film in hopes of stumbling upon a nugget of inspiration that would set my course. Before long, I ended up on the Rotten Tomatoes page for Ramsey’s previous feature, We Need to Talk About Kevin.

By-and-large, I am of the opinion that Rotten Tomatoes is an unhelpful tool in regards to the evaluation of movies (other than being a hub of reviews, some of which offer more insight than the “Tomato-meter”) as well as harmful to the film industry in general. But I was struck by the snippet included from Steven Rae from the Philadelphia Inquirer’s review. “Fragmented,” Rae declares, “dreamlike, a whir of memories and misery, We Need to Talk About Kevin is unsettling, but also somehow unnecessary.”

Rae’s insight into Ramsey’s other film has essentially alleviated my from the chore of writing a review about her new film, as those words perfectly encapsulate my feelings towards You Were Never Really Here. And yet, I have words to fill, so here are a few more. 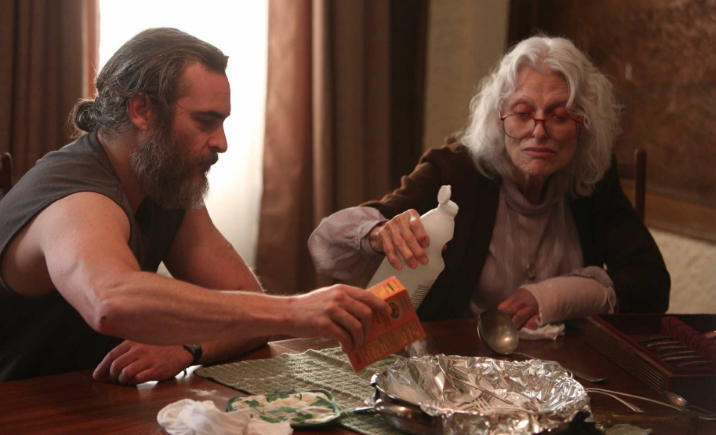 You Were Never Really Here is two films, neither well-executed, both sitting uncomfortably with the other. The first film is a pulpy, violent thriller, something along the lines of Drive with palpable inspiration also taken from Martin Scorsese’s Taxi Driver, among other films.

The second film is an unsettling, sluggish, portrait of a veteran suffering from crippling PTSD. Ramsey can’t quite sell this second film because she’s clearly also interested in including exploitative action that renders any comment she’s trying to make flaccid. The first falls flat because Ramsey doesn’t quite know how to enjoy herself, clogging her fun with stodgy, inappropriate artistry. Thought and schlocky violence are not necessarily mutually exclusive but Ramsey is not a good enough filmmaker to conjugate one without the other suffering.

Joe (Joaquin Phoenix) is the afflicted veteran. He earns a living by hunting down sex traffickers and rescuing their victims, dealing out brutal retribution to the perpetrators. His weapon of choice is a hammer. “I’ve heard you can be brutal,” one client tells him. “I can be,” he replies. He is, although we rarely get to see the violence explicitly, a result, reportedly, of Ramsey’s paltry budget.

Joe lives at home with his mother (Judith Roberts). Ramsey uses Alfred Hitchcock’s Psycho as naff short-hand to expound, somewhat, their relationship, though Robert’s brief performance offers some of the junctures in which the film shines. 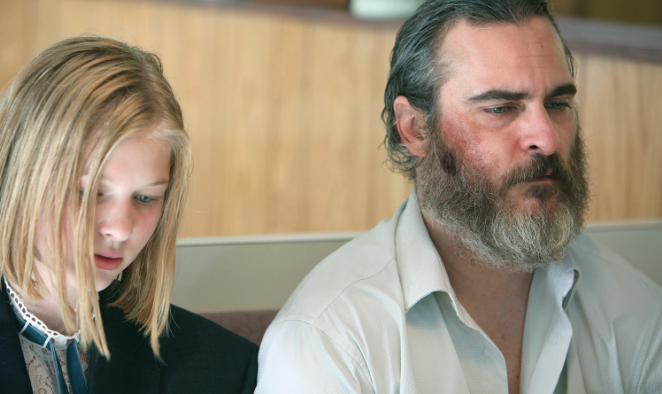 The film is aided enormously by the presence of Phoenix, whose eyes in individual scenes express more than most entire performances. Despite Phoenix’s presence, You Were Never Really Here can’t quite find a sense of emotional clarity – the strokes here so broad and patent that it has the effect of reducing the emotional stakes to zero.

Moments of brightness and certainty in Ramsey’s film are dulled by the overall effect that she has engendered. It is a film, I suspect, that will receive a lot of positive attention because of intentions rather than what Ramsey has actually accomplished. It is a feverish mess masquerading as something more because of Ramsey’s flair for image, and her skill at conceiving interesting moment-to-moment cinema. These interesting moments in You Were Never Really Here are strung together with such monotony that we are never provided with any compelling reason to keep watching.

You Were Never Really Here is not a deconstruction of masculine violence in cinema, as some have suggested, it is another example of it, a poor one, that adds a layer of solemnity that belittles both layers. It is a film that wants to be a different kind of action movie but Ramsey hasn’t a grasp on the fundamentals required to move conventions into new territory.