"...no stone is left unturned in exploring where things might go when someone reconsiders their particular hungers. "

"Diminishing the impact of Raw, though, is that the individual scenes don’t really add up to something profound. "

Vegetarians are not supposed to eat meat. It’s something we take seriously, as we should, but for many it’s just a dietary preference or political position. Still, if we give them food that’s even been near meat, we feel we must tell them for fear of the full-body biological crisis that could result from consuming it. Rarely do we expect anything like what happens to Justine, a first-year veterinary school student in the new movie Raw, who has to ingest raw rabbit liver as part of an initiation rite on campus. If discovering an errant lump of hot dog in her mashed potatoes was bad enough, who knows what this would do.

Well, we as viewers do, now that we’ve watched the movie. Which is the feature debut of French director Julia Ducournau, and which previews really good things for a woman announcing herself as a visual stylist who isn’t made squeamish by gore. Raw is unsettling indeed, and the same urge to vomit afflicting a vegetarian who swallows hot dog may greet the unsuspecting viewer. So, don’t go into this movie unsuspecting. 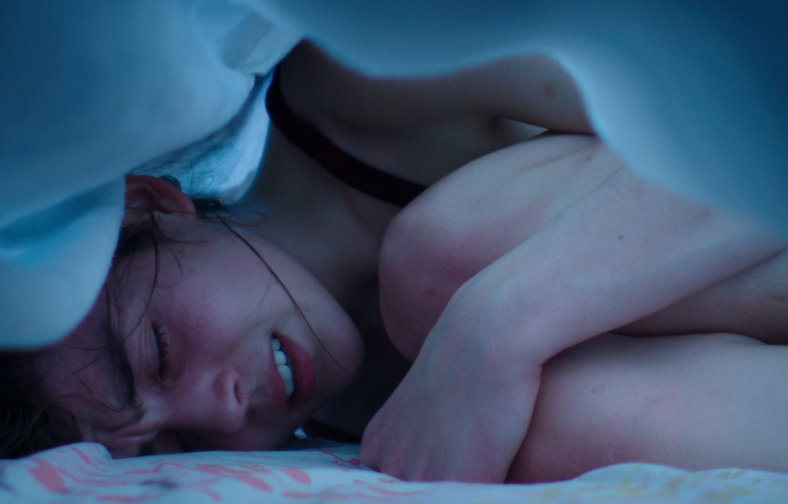 Justine (Garance Marillier) is a legacy in a number of ways. Not only has she inherited her family’s profession, becoming the fourth member to attend a country veterinary school, but she’s also had a dietary refusal of meat handed down to her. Campus goes into chaos on her first night, when older students overturn the dormitories, trashing rooms and throwing mattresses out the windows, as the beginning of a week of heavy hazing. Sometimes this involves crawling through the dark underbellies of buildings to get to a ripper party; other times, being doused in animal blood. The most confronting moment for Justine arrives when she must plunge her hand into a jar of rabbit innards and swallow a handful, chased by a shot of tequila. Her older sister Alexia (Ella Rumpf), a student at the school who’s taking a sadistic enjoyment in the hazing, tells her it’s no big deal.

Enough body horror follows to make David Cronenberg blush. Without spoiling the exact nature of that body horror, let’s just say that no stone is left unturned in exploring where things might go when someone reconsiders their particular hungers. As such, the movie contains a number of dynamite set pieces that are not for the faint of heart.

Diminishing the impact of Raw, though, is that the individual scenes don’t really add up to something profound. New to feature length filmmaking, Ducournau has not yet honed her skill for building toward a climax. Her artistic sensibilities, which serve her incredibly well in individual sequences, prevent her from following a narrative structure that would help rein in this wild and woolly material. There are times when she dramatises the real-world consequences of some of the stuff we’re seeing, and others when it seems like this outlandish behaviour exists in a vacuum, almost a fantasy world. The balance is awkward.

But let’s talk about some of those individual scenes. They range from virtuoso to grisly. In the former camp, there’s the opening night party, which the first-years reach by crawling on all fours through the dark. The camera then follows them in an unbroken take through a bacchanal that one imagines would regularly be necessary in a high-stress environment that’s cutthroat in the more metaphorical use of that word. As the characters pop pills and dance to EDM, you get a sense of this university as an environment of extremes – they work hard, they party hard. This place is just plain hard. Ruben Impens’ camera swallows it whole. 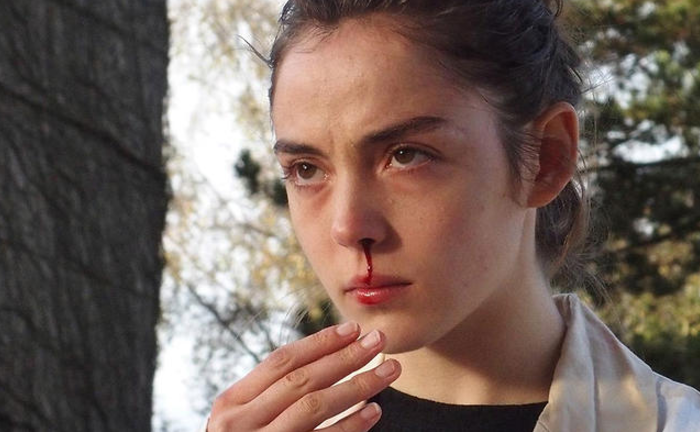 Then there’s the impressionistic scene of Justine pulling metres of hair out of her mouth, toilet-side. You know the magician with the endless stream of coloured scarves? Yeah, it’s kind of like that.

It’s just too bad that Raw is not a lot deeper than its beautiful, gross surface. The film skirts up to ideas about the bonds of sisterhood, the pressures of academia and the strange dichotomy between helping and hurting animals (you won’t believe the process involved in horse dentistry). It doesn’t generally pursue these ideas, which may be why it ends up in an unsatisfying place, emotionally and intellectually. Viscerally, though – you’ll rarely see anything like this.