"Rarely has one movie tried to cram in this much Canadian humour..."

As with any other cinematic genre, comedy has evolved over the years, and continues to do so. Sometimes it updates its references to be more topical, other times it adjusts its essential mode to be more consistent with the prevailing mentalities and social morays of the time – or intentionally to oppose them.

Broken Lizard – the comedy troupe and creators of Super Troopers and its sequel, Super Troopers 2 – have not evolved. Their humour has always had a sophomoric element that’s meant to appeal to a certain adolescent male idiot, or at least the adolescent male idiot in all of us that we need to indulge from time to time. In other words, the comedy feels old-fashioned, as might be expected when the original film (and still the troupe’s calling card) came out in 2001. 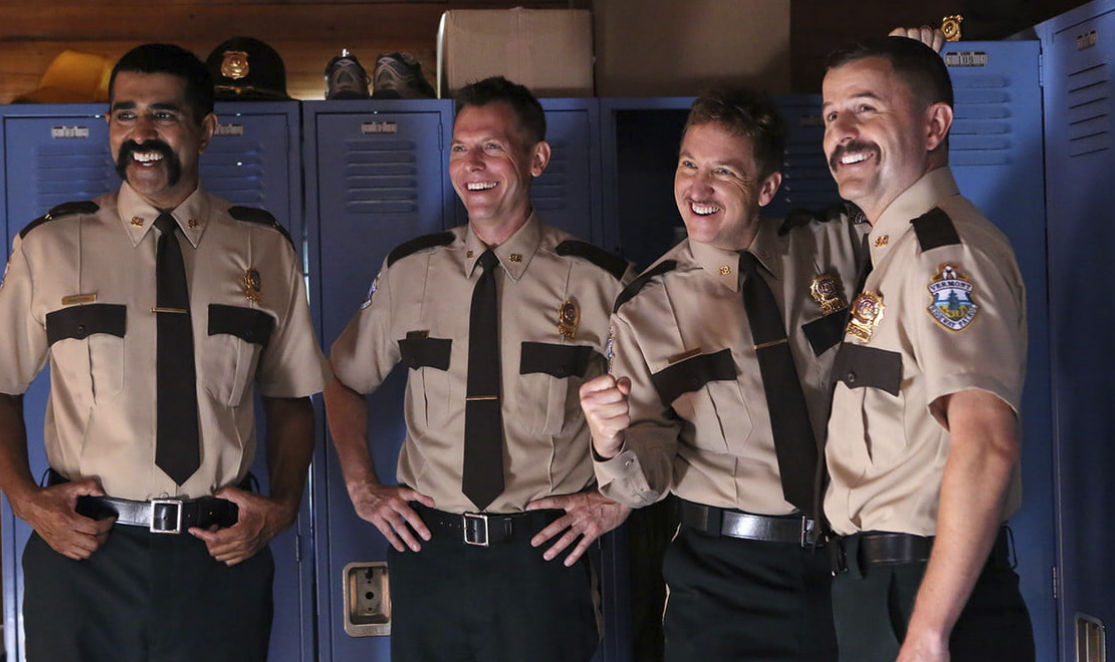 Super Troopers 2 does not apologise for this stunted, time-warp feeling, which is probably a function of the fact that all the actors in this troupe are within two years of their 50th birthdays, and may not even recognise this is how the film comes off. But just because you don’t apologise for something, or the absence of that thing, doesn’t excuse you from being funny, and Super Troopers 2 succeeds in that regard only sporadically.

The original film was about a bunch of cheeky Vermont state troopers and their run-ins with local motorists. If there was more of a plot than that, probably even the film’s most devoted fans, of which there are many, don’t remember it. Which is only partly because it was aimed squarely at stoners, and marijuana tends to make one forgetful. There really wasn’t much going on in the movie other than the outlandishly juvenile set pieces and a loose plot related to the uncovering of a criminal enterprise. In this case, though, that was enough. For the most part.

Super Troopers 2 follows the same format. Their previous unorthodox shenanigans have forced the primary five cops into resignation, leaving them all up to some kind of blue collar job or other. Their opportunity for redemption and to reunite comes when the border between Vermont and Quebec to its north has been reassessed, allowing both sides to agree that the U.S. should annex a chunk of formerly Canadian land into Vermont. It’d leave a pretty ugly wart on the previously smooth northern edge of the iconic U.S. shape, but okay. As is often the case in comedic setups that make only a token gesture toward plausibility, officers Ramathorn (Jay Chandrasekhar), Rabbit (Erik Stolhanske), Mac (Steve Lemme), Foster (Paul Soter) and Rod (Kevin Heffernan) are deemed perfect candidates to oversee the police handover from the local government and a trio of contemptuous, French-speaking mounties.

Rarely has one movie tried to cram in this much Canadian humour, but it’s not all as groan-worthy as you might expect. Both French accents and the slight Canadian adjustments on the American pronunciation of words are given a repeated skewering. These look like a comedy master class compared to the similar attempts by Kevin Smith in his recent film Yoga Hosers. 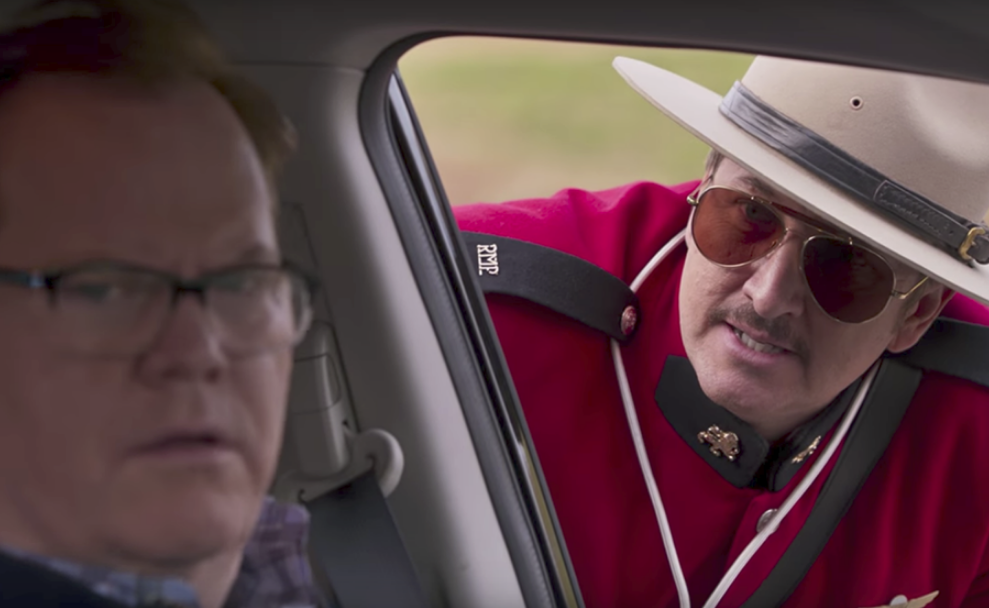 Still, a little of it goes a long way, and there’s not quite as much mileage as Broken Lizard thinks in the scene where the troopers, faking French accents, torment some stopped American motorists with the following phrase: “The key to life is happiness in your household.” Of course, when said with a French accent, it sounds like “a penis in your asshole” – intentionally, to make the motorists feel awkward. That’s about typical of the level of comedy, and of the movie’s MO that carries over from the first film: episodes of practical joker cops humiliating stopped motorists.

There are some other scenes that work pretty well, but on average they don’t seem like a step forward from anything in Super Troopers. We wouldn’t necessarily expect a sequel to improve on the original, but when 17 years have passed between them, we might expect the envelope to be pushed in some way that feels different. No luck here. A scene where the cops all sample various smuggled pills, which prove central to this film’s criminal conspiracy, has a few laughs, but mostly just feels like the hundredth movie this decade in which the effects of a particular drug are meant to be the punchline in and of itself. 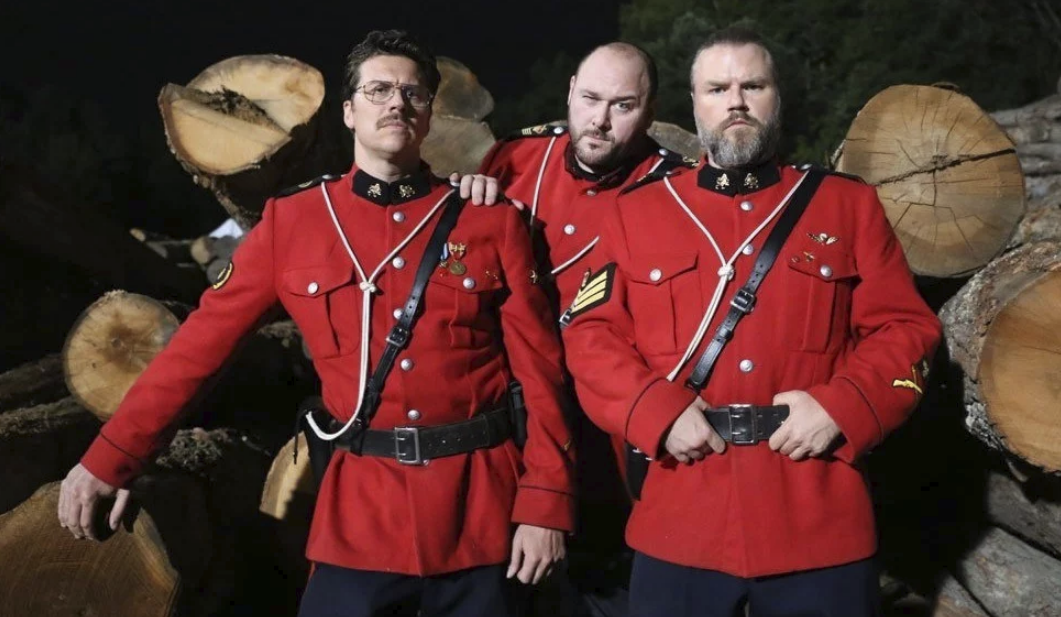 Perhaps the film’s funniest scene is its opening, in which the cops are the ones stopped instead of doing the stopping. It turns out they’re jamming in the back of a tour bus, as they formed a band, called Cracklin’ Bacon, after they were deposed from their state trooper jobs. It’s also a dream sequence, but we don’t know that at the time. The cops doing the stopping are played by Seann William Scott and Damon Wayans Jr., and they’re such fans of Cracklin’ Bacon that they each do an impromptu falsetto version of one of their songs in an attempt to join the band (while ignoring the copious amounts of marijuana smoke permeating through the bus). I won’t spoil how the scene ends, but I will spoil what the cop having the dream says when he wakes up – that the cops in the dream were played by “Stifler and Damon Wayans Jr.” “Stifler” of course being a reference to Steve Stifler, the name of Scott’s most well-known character, who appeared in 1999’s American Pie.